Herdwatch to expand after revamping ‘CRM for cows’ solution 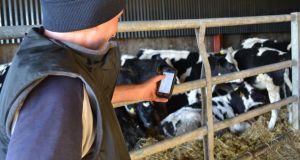 Herdwatch has developed a solution that is used by 12,500 dairy and beef farmers

Irish agritech company Herdwatch is looking to expand beyond its core markets of Ireland and Britain after investing more than €1 million revamping its software platform.

The company is behind a popular farm-management solution that is used by 12,500 dairy and beef farmers, almost all of which are paid subscribers.

Founded in Roscrea, Co Tipperary, in 2011 by Fabien Peyaud, the company is forecasting that annual recurring revenue – a metric typically used by software-as-a-service (SaaS) companies – will double from an expected €2 million in 2020 to €4 million by the end of 2022.

Herdwatch was the inaugural winner of AIB Start-up Academy in 2015 for its “CRM for Cows” platform, which Mr Peyaud developed after realising that most farmers weren’t using any form of software to manage their businesses.

The solution, which is fully approved by the Department of Agriculture, has now expanded into a full suite of products covering everything from cattle registration and compliance to profit monitoring. with revenues increasing 30 per cent year-on-year.

“We’ve about a quarter of dairy farmers in Ireland on the platform and there’s probably another quarter that would benefit from using Herdwatch and in Britain it is a similar story,” said Mr Peyaud.

He said that with an estimated two million cattle farmers in the European Union and the US, there are plenty of opportunities for Herdwatch to become well-known across the world.

“The next five years are about global expansion with a plan to be in a lot more markets. We are currently in talks over possible partnerships that will see us making an even bigger difference for farmers, he added.