Tax would hit technology giants including Amazon.com, Google, and Facebook 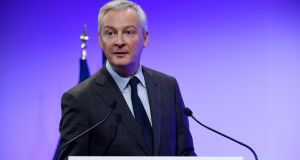 France held firm on its plans to resume collection of a national digital tax that hits technology giants including Amazon. com, Alphabet’s Google and Facebook, saying it wouldn’t be swayed by threats of US sanctions.

The US plans to announce further details in the long-running battle with France over taxes on technology giants as soon as Friday.

The tariff list to be released will be in the ballpark of $500 million to $700 million in goods, according to two people familiar with the matter. The items targeted could include levies on French wine, cheeses and handbags.

“France’s response will be unchanged,” the finance minister Bruno Le Maire said in Brussels. “If there is no international solution by the end of 2020, we will, as we have always said, apply our national tax.”

While a US announcement may come Friday, the US may delay the implementation of the duties until France starts collecting its tax later this year, one of the people said.

Robert Lighthizer, the US trade representative, indicated such a move was imminent at an event Thursday, according to Politico.

“We’re going to announce that we’re going to be taking certain sanctions against France, suspending them like they’re suspending collection of the taxes right now,” the Washington-based website reported Lighthizer as saying in a webcast hosted by Chatham House, a London-based policy institute. Le Maire said he would speak to Lighthizer by telephone later Friday.

US treasury secretary Steven Mnuchin early Thursday said that he and Lighthizer had completed an extensive review before the Friday deadline to make a determination within a year of a Section 301 investigation.

As of early Thursday, the pair had not discussed the matter with the president for a final decision, Mnuchin said.

The US withdrew last month from international talks over a digital-tax deal after failing to reach an agreement on developing a global levy, Lighthizer said last month during a Congressional hearing.

At the time, Treasury Department spokeswoman Monica Crowley said in a statement that the US suggested “a pause in the talks” so that governments can focus on responding to the Covid-19 pandemic and reopening their economies.

The Organisation for Economic Cooperation and Development has been trying to find agreement among almost 140 countries on a global tax overhaul to address how multinationals – particularly big tech companies – are taxed in the nations where they have users or consumers. An international deal would prevent dozens of countries implementing their own versions of levies.

Several European countries – Including Austria, France, Spain, Hungary, Italy, Turkey and the UK – have already announced plans for a digital services tax. Many others have discussed implementing one and India in April expanded such a levy that it uses.

“We call on the US to return to the OECD negotiations on taxing digital giants,” Le Maire said. “Sanctions are not a way of operating between countries that are friends, as the US and France are.” – Bloomberg