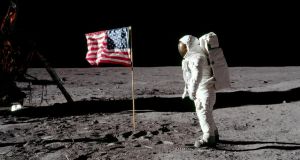 When Neil Armstrong set foot on the moon on July 21st, 1969, about 600 million people watched the culmination of a frenetic few years at Nasa, racing to beat the Russians to the moon.

The race to get to the moon was done without many of the technologies that we consider vital today. The days of 3GHz chips and 1TB storage were far away, much less the idea of carrying a powerful computer in your pocket.

“In the 1960s we had no PCs, no handheld calculators, and no cell phones. We even had to get up off the couch at home to manually change the channels on TV – and there weren’t very many channels,” explained Phil Pollacia, IBM manager in the Orbit/Reentry system of the Realtime Mission Control Centre Command Control System. “We used the tools we had: the IBM computer, slide rules, mental computations, ‘gut feel’ analysis – and prayers. We made it work.”

The systems behind the Apollo 11 mission to the moon were considerably less powerful than the average smartphone. But that is doing the hardware somewhat of a disservice. Although the Apollo Guidance Computer (AGC) was far less powerful than a modern-day computer, it was about a decade ahead of its time, with the first generation of home computers that emerged in the late 1970s stacking up well against the Nasa devices.

Looking at it in raw numbers, the state-of-the-art computers at the time were thousands of times less powerful than a modern phone. The MIT-developed AGC used core rope memory – what we would call ROM – to store its programmes, with a capacity of 36,864 words. Its RAM was equivalent to 2,048 words.

Put it up against modern devices and on paper at least it’s a one-sided fight. However one advantage the AGC has over its modern rivals: it was reliable. It got its astronauts to the moon and home again, which was no small feat. And it did that without malfunctioning or crashing.

The AGC wasn’t the only technology needed to get Apollo 11 to the moon. IBM developed the brains of the Saturn V rocket, the guidance system that steered Apollo 11 towards the moon. And on the ground, IBM was providing computer systems that underpinned the entire Nasa programme, crunching the numbers that would ensure a successful mission.

“IBM was one of the prime contractors supporting the space programme in Houston and Huntsville. Simply stated, we were tasked with developing a real-time operating system. We had to take the requirements of each mission and translate them into computer code. It was meticulous, painstaking, and it had to be perfect,” said Pollacia.

“The resulting product for Apollo was approximately 5 million lines of code, which supported simulations, astronaut training and practice, flight controller training, and all aspects of computing for the Apollo project.

“The concept of real-time computing was very new – we may have been the first truly real-time system. It was designed to support launch, orbit, translunar objectives, landing (descent) and ascent, and return to Earth.”

That programme taught the computer company a lot about real-time computing, computer reliability and support. In Pollacia’s eyes, the experience helped IBM in the future design of hardware and software.

But IBM wasn’t the only company to benefit from Nasa’s space programme. IBM was just one of thousands of companies that took part in the space race. That influence is still being felt today; while Stanford University is credited with fuelling Silicon Valley, it also has its roots in the space race.

“A huge amount of money was given to universities to spur science and technology. This led to the creation of PhD programmes, a lot more investment in science,” said IBM’s Saswato Das. “By the time JK called for the moon missions, there was already a pipeline of engineers who are coming out of this investment. After a while, the whole space race was finished. But this pipeline of engineers led to Silicon Valley, led to a lot of investment. So the space race is another unintended consequence of America’s dominance in technology.”

If you look around your home and office, there is a good chance that you are using technology that was developed either for the Apollo space programme or came about as a direct result.

Not the fibreglass rolls that you find in the attic, but something a little shinier. We are all familiar with the metallic blankets used to help people who may be suffering from an extreme drop in temperature, but the material used “space blankets”, as they are known, has many other applications.

Remember the images of the lunar lander that looked like a small child had been let loose with some glue and a roll of foil? The insulation barrier – aluminium foil and mylar – helped to protect vital equipment on board the spacecraft and shielded the astronauts themselves from potential radiation on their mission to the moon. These days though it can be found in everything from vehicles to your home as insulation, protecting against heat, cold and muffling noise.

You can thank the space programme for those comfortable athletic shoes that you wear. The material used in “moon boots” went on to influence the design of Earth-bound footwear, adding more cushioning in the sole to help absorb impact. It was developed by Apollo engineer Al Gross, who not only came up with a way to cushion the impact in the sole of the shoe, but also adapted a process used in Nasa space suit technology in an external shell.

Freeze dried food wasn’t an invention specifically for the space programme – Nestle began developing it in the 1930s and Project Gemini, Nasa’s second human space flight programme that began in 1961, also used the dry, crumbly meals. But Apollo 11’s astronauts used hot water with their dehydrated food, making it easier to reconstitute the dry meals – and apparently making them taste better. Your instant coffee and dehydrated noodle addiction of 1998 can be attributed to this.

Next time you are cleaning out your car, or taking out a portable vacuum cleaner to mop up a few crumbs, think about the origins of the Dust Buster. Black and Decker’s innovation has its roots in the space programme, where astronauts needed a lightweight and power-efficient drill to gather samples from the surface of the moon. Black and Decker developed technology to create the cordless tools, later using it to develop the Dust Buster.

Technology developed for on board the Apollo spacecraft to purify water is now used in several applications to kill bacteria, viruses and algae in community water supply systems, and to reduce lead in water supplies.

In 1967 a flash fire on board an Apollo spacecraft killed three astronauts during a rehearsal test for Apollo 1. That pushed Nasa into finding better ways to protect astronauts and their vessels, developing new fabrics in partnership with Monsanto and a new breathing apparatus.

Solar panels have their roots in the Apollo lunar module programme, providing a renewable energy resource that can be used both in space and on Earth.

From easier dialysis treatments to programmable pacemakers and implantable heart rate monitors that act as mini defibrillators, the advancements brought by Apollo missions have been felt in the medical sector.

Ireland may not have been involved in the space race of the 1960s, but we do have a growing industry here.

“The situation has evolved quite a bit in Ireland particularly in the past few years in terms of technology for the space programme,” explained Tony McDonald, Programme Manager Space Industry, Enterprise Ireland.

In total, there are about 70 companies working in the space sector, and since 2000, more than 80 Irish companies, including InnaLabs, Arralis, Pilot Photonics, Radisens Diagnostics and Skytek, have won contracts with the ESA contracts worth more than €80 million. The companies range from life sciences to radar technology.

“We don’t have a traditional space sector in Ireland but what we do have is a growing number of highly innovative tech companies adapting technology for use in space,” said McDonald. “You have to look at building the performance and into those technologies. If you put them into a satellite or space system you have to be sure they are going to work.”

At the heart of it is our membership of the European Space Agency. Ireland joined in 1975, a move that opened up the organisation’s tenders to Irish companies. There is also partnerships with Cork’s Tyndall National Institute, Athlone Institute of Technology, Maynooth University, and the Centre for Marine and Renewable Energy at UCC.

But another factor is the trend towards private involvement.