Mid-range smartphones could be a far more savvy choice 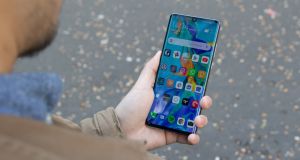 Smartphones are expensive. There was a time when spending €800 to buy a phone sim-free was a major commitment; these days you can comfortably edge that figure towards €1,000 and beyond, depending on how rich your tastes run.

Yet you don’t actually need to spend that amount. Sure, it’s great to have a virtual assistant that will fix your photos, organise your appointments and prompt you when you need to leave the house, kind of like a high-tech version of your parents but one that never asks you if you’re putting the kettle on. If you are prepared to forgo the first part of that and take your own photos you can opt for a cheaper phone.

Or perhaps you can compromise on the camera a little. Not much, mind you; maybe just eliminate the ability to use your phone as a telephoto lens that could easily double as a spy camera.

There are plenty of mid-range smartphones that can do the job well. We bet you don’t even notice the sacrifices you make to save a few euro.

Unlike in the flagship phones, there is very little to set the mid-range phones apart in terms of looks. Both Huawei and Samsung ditch the rounded edges on the screen in favour of a simpler design. On one hand it means the phones blend in a little, but on the other it will probably mean a phone that stands up to the occasional drop more robustly.

There are small differences. Huawei and Apple have kept the notch in the screen, which is sure to annoy some people; Samsung has gone for the subtle round punch out of the corner of the AMOLED display instead; and Google’s Pixel has a band across the top so the display isn’t quite edge to edge.

That’s not all. The Google phone is marginally smaller at 6 inches to the iPhone and Huawei’s 9.1 inch display, while Samsung’s S10e is noticeably smaller than the others, with a 5.8 inch display.

Google has opted for a glass front and polycarbonate case (ie plastic) but it doesn’t feel cheap; the others have kept the same materials as their flagship smartphones. That’s a personal preference but the Pixel still looks great despite losing its metal back.

There is something to be said, though, for the iPhone XR’s design which may stick with the tried and tested Apple design but comes in lots of colours. It’s IP67 rated too, which beats Huawei’s water resistance rating, although the Samsung will have better dust protection with an IP68 score. The Pixel 3a XL isn’t waterproof at all, which is a mark against it.

For the most part the phones took decent photographs in all but the most challenging lighting conditions.

The iPhone XR goes for a single camera here, saving the more advanced versions for the more expensive phones. But you do get things like the portrait mode, a six element lens and a quad truetone flash, which makes up for forgoing the ability to get closer to your subject without having to move your feet.

The 3a XL camera doesn’t offer the telephoto lens either, but instead it has gone for the decent low-light mode with Night Sight, and a good portrait mode for blurring the background, making colour stand out and getting some decent close up shots. Samsung offers a dual camera on the rear of the phone, with a 12MP wide-angle camera and 16MP ultra-wide option. The images it produces are great, with good colour reproduction and minimal noise.

The Huawei phone knocks it out of the park here. The camera set up is less advanced than the Pro version of the phone, but it still keeps the triple camera on the rear of the phone. There’s a bit of AI in there too, which will help identify the best settings for your photographs. The end result? Stunning portraits, sharp landscapes and close-ups that may not be quite as amazing as its sibling’s shots but are still quite amazing for a small camera phone.

The quick take is that all of these phones will take decent photographs in most circumstances, but the triple camera on the Huawei phone has the edge

It’s worth noting that at the beginning all phones are performing at their best. You won’t notice a huge amount of difference between the Android phones, although putting them side by side you might notice a tiny lag on opening apps with the Pixel. It has less RAM than the other two devices – 4GB to the others’ 6GB – and you can’t expand the storage capacity. Yet it’s not enough to discount it because on a day-to-day basis, you won’t really notice the difference – unless you fancy taking a lot of high quality videos and photos and don’t feel like transferring them to cloud services. The XR suffers from the same lack of expandable storage, although you can throw money at the problem and opt for the 256GB version. That will cost you over €1,000 though, which is almost double the price of the Pixel and more expensive than the two phones that offer expandable storage. Is the extra space really worth that much? We could talk about benchmarks, but the reality is that the average person rarely chooses their phone based on a test they know nothing about. What they want to know is that their phone won’t be so frustratingly slow that it takes several seconds to perform tasks. None of the phones were slow, overly laggy or in danger of being thrown in frustration. However, that may change over time as you load apps.

If you were to take the phones on their paper values the list would go like this: the iPhone XR has the smallest battery capacity at 2,942 mAh, followed by Samsung at 3,100 mAh. In third place you have Huawei with the P30’s 3550 mAh, while the Pixel 3aXL has 3700mAh.

It’s not just about the numbers on paper though; it depends on the software, the screen and all the additional sensors that draw power from the battery. The iPhone has a low power mode in iOS that will eke out the battery a little longer, while the Android phones have modes that will practically put the phone into hibernation, save for the essentials. You should get most of a day out of all these phones.

So if it’s a toss up on the battery power front, what else can we look at?

Kudos to Samsung for keeping the wireless power-sharing feature in the cheaper S10e. You can also charge the device wirelessly, ditto for the iPhone XR. Huawei eliminates the wireless charging facility altogether from the P30, which is a shame, as does the Pixel. That means no reverse charging with the Huawei phone, an omission that almost makes it worth paying extra for the P30 Pro.

So not only do you get more options for charging the Samsung, you can also siphon off its battery power to help keep your wireless-enabled devices working when you are far from a power source. A feature worth shouting about.

This is a fairly easy one to pick out. Apple may comes in at the top end of the price scale here but compared with the entry level iPhone Xs Max, the XR at €879 is at 75 per cent of the price. The rest of the phones stay close enough to the 70 to 75 per cent range, with one exception. The 3a XL is less than half the recommended retail price of the Pixel 3 XL at €479. On price alone the Pixel wins hands down.

We can’t just look at it in isolation, though, since you can pick up a smartphone for under €100. For that price the Pixel offers an impressive amount of features and more than holds its own against its rival on all fronts. So it’s a case of cut price rather than cut feature.

There are some things you should know that may affect your choice of phone. For example, the iPhone XR is the only one that ditches the headphone jack; the three Android phones keep the handy 3.5mm port where it should be. And speaking of that, Huawei’s headphones are incredibly uncomfortable, but Samsung includes a set of AKG earbuds in the box, which gets the thumbs up.

However, the elephant in the room with regards to Huawei is the ongoing issues with the US government that have yet to be resolved. Google may have blotted its copybook with a few people when it comes to the amount of data they have on its customers, but that doesn’t mean everyone is planning to ditch them from their lives. Finding you are shut out of accessing Google services on your Huawei phone may be too much for some customers.

On the other hand, the company is offering a two-year guarantee with its phones that will allow customers to upgrade for any reason during that time.

If you are an iPhone fan there is little that could persuade you to make the jump to Android. And if you aren’t willing to spend out for the Xs, the XR will do everything you could ask from an average smartphone. Samsung and Huawei are almost matching each other when it comes to specs and camera quality - and price.

While any of these phones would be worth the money you pay for it, the one that punches above its weight is the Pixel 3a XL. A true competitor to the Android phone makers, the Google phone definitely merits a closer look if you plan on purchasing a new phone in the near future. Its camera is decent, it performs reasonably well and it looks good – but it costs significantly less than the competition. Just buy a decent case for it, and keep it away from the pool.