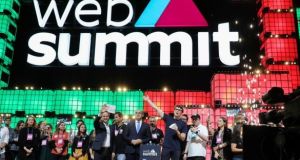 Paddy Cosgrave, chief executive and co-founder of Web Summit (centre right) at the official opening ceremony of the 2019 Web Summit in Lisbon. Photograph: EPA/MIguel A Lopes

Pretax profits at the group that operates the Web Summit declined sharply last year as the company agreed a deal to invest $2 million into Amaranthine Partners, a US-headquartered multi-million dollar venture capital firm.

Newly filed accounts for Manders Terrace Ltd, the holding company behind the Web Summit and its various sister events, show pretax profits fell from a record €3.8 million in 2017 to just €125,823 last year.

The decline came as the company said it had entered into an agreement to put $2 million (€1.79 million) into Amaranthine, a $50 million tech-focused venture capital firm with an initial $500,000 invested last year. The last instalment is due in the first quarter of 2021.

The decline in pretax profits at Manders Terrace also coincides with a rise in administrative expenses at the group to €17.5 million from €12 million a year earlier.

The Web Summit conference was founded by Paddy Cosgrave, Daire Hickey and David Kelly in Ireland in 2009, with fewer than 400 attendees at the inaugural event.

The relocation of the tech conference in 2016 enabled the company to significantly grow its flagship event, with the number of registered attendees rising from fewer than 30,000 in Dublin in 2015 to 50,000 a year later in Lisbon. The most recent Web Summit, which took place last month, had 70,469 attendees.

The Web Summit last October agreed a deal to remain in Lisbon until at least 2028 under a €110 million deal with the government.

The latest accounts show that Mr Hickey resigned as a director of Manders Terrace in August. He left the company in 2017 to launch 150 Bond, a strategic advisory company to tech companies such as Let’sGetChecked and Pointy, which has offices in New York and Dublin.

Web Summit this year folded its fintech-focused MoneyConf back into the main Lisbon-based conference. The group has a number of other successful events, including Collision in Toronto and Rise in Hong Kong. The latest instalment of Rise, which was due to be held next March, was recently postponed due to the ongoing tensions in the protectorate.

1 Who are Ireland’s 17 billionaires?
2 ‘If you don’t like challenges, you should not be in the airline business’
3 Election proposals may make the housing crisis worse
4 RTÉ’s multiple lobbying meetings with politicians
5 Food-processing plant and warehouse in Meath for sale at €1.5m
Real news has value SUBSCRIBE