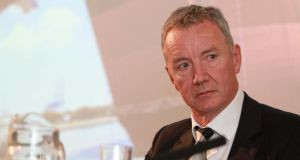 They may have been burned badly last year, but bearish betters against Tullow Oil’s stock are back out in force, after the group unveiled a £607 million (€702 million) share sale on St Patrick’s Day to shore up its balance sheet.

UK hedge fund Oxford Asset Management expanded its “short” position in Tullow by 17 per cent last week to 6.4 million shares, the equivalent of 0.7 per cent of the company’s stock, according to Bloomberg data. WorldQuant raised its bet against the oil company by 13 per cent to 9.7 million shares, while fellow New York-based Linden Advisors increased its short position by 21 per cent to almost 8.9 million shares.

So-called short sellers make money from falling share prices by borrowing stock, selling them in the market and buying them back and returning them to their original owners once the shares have dropped. The strategy can backfire though, as Yorkshire-born billionaire Crispin Odey would testify.

Crispin’s flagship hedge fund Odey European saw clients pull tens of millions of euro of their money last year as the fund’s short position in Tullow – its biggest such bet by value – proved to be a massive loss-making call as the company’s shares jumped almost 90 per cent last year against the backdrop of rebounding oil prices.

Odey European actually moved last week to pull in its shorts on Tullow last week, reducing its position by 18 per cent to 17.1 million shares.

As Tullow’s founding chief executive Aidan Heavey prepares to hand over the reins to his current chief operating office Paul McDade at the start of next month, his move to raise equity will help ease the group’s large debt burden – something that had drawn the bearing hedge funds in the first place. The group’s net debt stood at $4.8 billion (€4.4 billion) at the end of 2016 and it aims to refinance more than $3 billion of bank facilities this year.

But while Goldman Sachs moved on Monday to upgrade Tullow’s stock to “neutral” from “sell”, following a decline in the wake of the share-sale news, analysts in the investment banking giant gave neither bearish nor bullish investors much to work off. They see “risks and rewards roughly balanced and do not see a compelling trade, either positive or negative” as it remains sensitive to oil prices.