EU and UK both recognise need for transition deal, but no guarantee it will happen 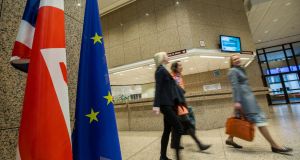 A transition deal sounds like a dull piece of administration to get from one place to another, something without much real importance. But in the Brexit talks this will be one vital phrase, with very important implications for Ireland.

Under EU law, Britain must leave the union two years after triggering article 50, unless there is unanimous agreement that the period will be extended. However it is increasingly clear it will take a lot longer than two years to negotiate Britain’s future arrangements with the EU, and put them all in place. The transition deal is the agreement about what will happen after Britain leaves the EU, but before a new deal is finalised and implemented.

Fortunately, there appears to be a growing realisation on both sides that such a deal will be needed. For example, both sides reportedly realise that it will probably be necessary for Britain to remain in the EU customs union – which allows free trade in goods – for two to three years after it leaves the EU. This would allow new trade terms between Britain and the EU to be finalised and allow Britain to put in place new regulators in many areas. It would also allow time for new customs borders to be phased in.

For the Irish economy this is important. If Britain crashes out of the EU without any deal, then the worst case scenario would mean tariffs and customs checks would come in under WTO rules as soon as the UK leaves in two years’ time.

If, on a brighter scenario, the customs union remained in place for a couple of additional years after 2019 under a transition deal,and was replaced by a new trade deal without any tariffs, or with minimal ones, then the outlook would be a lot brighter for Ireland.

A transition deal would make sense for both Britain and the EU. But there are two risks. The first is that the talks break down completely. The second is that a deal on transition cannot be reached, because of disagreement on what EU rules Britain must abide by during this period. It is likely to be quite some time before we have clarity on all this – and on much else – in these marathon talks, meaning a significant period of uncertainty lies ahead.