Rapid7 to double headcount in Belfast with 200 new jobs 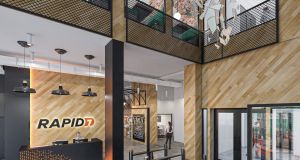 Rapid7’s offices in Belfast. Boston-headquartered Rapid7 has been busy expanding its footprint in Ireland in recent years.

Nasdaq-listed security analytics and automation company Rapid7 is to double its workforce in Belfast by the end of the year with the creation of 200 jobs.

The company, which first established operations in the city in 2014, is also taking on 49,000sq ft of office space at Chichester House, which recently underwent an £8 million redevelopment.

Invest Northern Ireland is providing £165,000 of support towards the creation of 30 of the new jobs.

Boston-headquartered Rapid7 has been busy expanding its footprint in Ireland in recent years. It acquired UCD-spinout Logentries for $68 million in late 2015 and last year bought Galway-based NetFort in a deal believed to be worth more than €10 million

“Rapid7 is committed to investing in the company’s global expansion, particularly in areas with impressive technical talent such as Belfast,” said Jamie Kinch, the company’s vice-president of real estate and workplace experience.

“Expanding our presence in Belfast, supported by InvestNI, will provide us with the space and resources we need to grow and attract the region’s top talent,” he added.

Rapid7 raised $103 million when it floated on the Nasdaq in 2015. The company, which has more than 7,800 customers globally, provides software and services that help companies better understand their IT environments and reduce their exposure to cyberattacks.