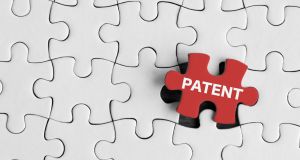 Patent applications filed with the European Patent Office (EPO) from the Republic rose to a record high last year.

New figures show Irish applicants filed 878 applications in 2019, as against 826 a year earlier, with Ireland posting the third highest growth rate among the 15 most active patent-filing countries behind Sweden and Britain.

Overall patent applications from the State have risen by 33 per cent over the last two years, the data shows.

“The strong growth in patent applications from companies and inventors in Ireland is testimony to the country’s increasing strength in innovation and R&D efforts,” said EPO president Antonio Campinos.

“The contribution of universities to the Irish growth in patenting is a particular strong point,” he added.

The Republic of Ireland was ranked in 21st place out of 40 countries in terms of the volume of patents filed. The US remained the leading country with 46,201 patents, equivalent to 25 per cent of the total. It was followed by Germany, Japan, China and France.

A third of all applications filed from the Republic were focused on medtech with 167 filings, as against 133 a year earlier.

Accenture filed the largest number of applications from Ireland with 111. It was followed by University of Ireland Galway, University College Dublin, Norton and Velos Media.