How to upgrade your home entertainment system for less

We’ll be watching movies at home for the forseeable, so we need the right gear 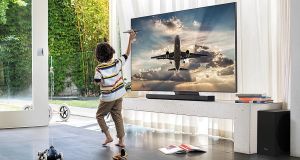 The ongoing coronavirus pandemic has made us change how we view our homes. Not only is it where we live, it’s now where we work. And increasingly, our homes are becoming the only place where we can go for entertainment.

So, with that in mind, we may be considering upgrading our home entertainment set-up, whether that is upgrading the audio in our livingroom or investing in a full home cinema set-up.

A survey conducted back in March, at the very beginning of the pandemic, found that people were streaming about 50 per cent more on Netflix and similar services, so it wasn’t too surprising that sales of cheap streaming devices also saw a rise.

However, the uncertainty caused by the pandemic has caused people to become a bit more wary about making big investments. As streaming devices grew in popularity, sales of televisions declined, with research company ABI Research estimating major TV manufacturers saw sales fall nearly 18 per cent year on year in the first three months of the year. In total, the market is expected to show a 3 per cent decline for the year before rebounding in 2021.

So, if you feel it’s time for a change, how do you get the most value for your money?

“The biggest thing to think of is what space are you working with, and what do you already have?” explains Jaimie Cantwell of Currys PC World. “If you’re going to be using your livingroom where you’ve just invested in a TV, that’s going to be very different to setting up almost a bespoke home theatre room where you might go down the route of a home cinema projector.”

One of the quickest – and least expensive – ways to upgrade your home entertainment system is to upgrade the audio. Most of us stick with the integrated speakers on the TV and, for the most part, they do fine. But, as TVs get thinner, the space available for those speakers gets squeezed.

“More so than not over the last few years, a lot of the manufacturers have been spending a lot of time on everything visual to do with the TV,” says Cantwell. “As a result, a lot of the TVs that you see are much thinner, which is brilliant, but as a result they don’t have as much room for those speakers so you compromise on sound quality.”

The simplest way to compensate for this is to invest in a soundbar. They can be neat, reasonably priced and give your TV audio a boost. Soundbars can range from €100 to €1,000, depending on whether you want a simple three-speaker device, or one that includes a wireless sub-woofer.

Some of the less-expensive devices include the JVC TH-D337B 2.1 Sound Bar (€100), which offers 120 watts, a wired subwoofer and bluetooth for streaming media to your speaker.

Move up a price bracket and you can get the Samsung Q60T/XU, a 5.1 wireless soundbar (€550) with a wireless subwoofer.

Nearer the top end of the scale is the Harman Kardon Citation Bar, a wireless 5.1 system which offers a full-colour LCD touchscreen, has access to more than 300 music services and voice control with Google Assistant. That will set you back just under €1,000 if you shop around.

If you feel like you can stretch a little further, the JBL Bar 9.1 Wireless Sound Bar (€1,099) comes with Dolby Atmos and DTS:X, and adds a few more speakers, including a wireless subwoofer and rear speakers.

“You get what you pay for, and if audio is really important to you, then you will invest in a soundbar to the same extent that you are in a TV,” says Cantwell.

There are definite advantages to going wireless. There is no need to tear into walls to run cables or in some cases have trailing cables all over the room. You can easily change your configuration, adding new speakers or changing their position at will.

Bluetooth has become popular for this, and with new technologies that improve the audio quality being introduced in recent years, bluetooth speakers can do a great job. Many of the soundbars now come with bluetooth built in, and if your TV supports bluetooth audio output, you can hook up a wireless soundbar in a matter of minutes. Some also include wifi for streaming sound to the speakers.

However, wireless speakers could potentially be less reliable, Cantwell says. The main culprit? Interference from other devices around the home. It’s the same reason why your wifi may be a bit patchy or temperamental. If you want to be guaranteed that your speakers will always work as they should, wired is the better option. If you prize convenience and versatility, look for wireless.

But what if you are in the market for a full audiovisual upgrade? Televisions are expensive, and not something we tend to buy on a regular basis. So when we do spend our hard-earned cash, we want it to last.

The good news is that TV technology has improved immensely in recent years. We’re not talking about anything gimmicky. The industry has finally let go of the notion that home 3D will be anything more than a novelty; instead it is concentrating on getting better pictures into the TV.

While HD TVs are still fit for purpose, you can now upgrade to an Ultra High Definition TV for a reasonable sum of money. You can also get a TV with High Dynamic Range, meaning you get a great picture with more realistic colour reproduction and great contrast. It may not seem important, until you see a side-by-side comparison.

There are only two types of display technology in TVs. LCD is your traditional TV technology that underpins a lot of the current crop of flat screens. With LCD, the pixels produce colour through a backlight from a cold-cathode fluorescent lamp (CCFL).

LED TVs have an LCD panel that is lit by more energy-efficient light-emitting diodes (LED). The latter can also be brighter than the previous generation, have better contrast and give you thinner and lighter TVs.

OLED, meanwhile, is a different type of technology altogether. “It doesn’t rely on that panel to light up the pixels,” explains Cantwell. “The pixels themselves are emitting light. It’s a much more premium technology, and it gives you much better contrast, deeper blacks – and it commands a price tag to match it.”

That price tag could be anything from €1,800 upwards, with LG, Panasonic and Sony all offering OLED TVs. It’s not just the price that is bigger. For OLED TVs, the smallest you can get is a 48-inch TV, and more common sizes are 55-inch and 65-inch TVs. That’s a lot of TV for the average Irish livingroom.

“You’re already up there into a larger screen size when you commit to OLED technology,” says Cantwell.

There is, however, a middle ground – at least on price. Samsung, for example, offers QLED TVs, a type of LED technology that uses quantum dots to enhance the colour. A QLED TV will typically cost you from €700 upwards, though the most expensive 8K version is more than €6,500.

Speaking of 8K, is it worth bothering with the new resolution? TVs offering 4K – about four times the resolution of high definition – have been around for a while, so it may be tempting to look at 8K devices to make sure that your investment will stand the test of time.

Realistically, though, 8K is not a necessary technology for the average home user. They are far more expensive than their 4K counterparts and, without the requisite content, they’re not too much use to TV owners right now, as 8K content is thin on the ground.

If you really want to get into the nitty gritty, you could look into the refresh rate of your TV. Do you know what your TV’s refresh rate is? Do you even care? There is a very good reason why it matters: the higher the refresh rate, the smoother the action on screen will look. For example, high speed sports, action films or games will look better on a 120Hz TV than on a 60 or 50 Hz device.

Most TVs sold these days have some sort of smart TV platform built in. LG and Samsung offer their own version, but there are Android TV devices out there that will give you access to apps and other online services through your TV screen and broadband connection.

If you want to stick with your existing TV but add some extra smarts, the easiest way to do it is with a streaming stick or box that you can use to connect it to the internet.

There are a couple of options. Chromecast (€39), Google’s streaming stick, doesn’t have any apps loaded onto it as such; instead you use your phone, tablet or laptop to access content and “cast” it, or stream it, to your TV. Some apps have the cast function built in, making it easy to send your content to the TV.

You can also screen mirror your phone on the TV, showing the entire display on the big screen. But be warned, it mirrors everything – that also means people will spot any notifications that pop up on your screen while your phone is connected to the TV.

If you are a committed Apple house, with Apple TV subscriptions and iPhones, iPads or Macs, for example, the Apple TV 4K (€196) box may be your best option. The latest version of Apple’s streaming TV box runs TVOS, which includes apps such as Prime Video, Netflix and YouTube, along with catch-up apps such as RTÉ Player giving you options when it comes to TV streaming.

There are other options. An extremely popular streaming stick, Roku, may be familiar to some people as the device upon which Now TV runs. You can also load apps such as Disney+ and Netflix on to the Now TV streaming stick (€25), and, unlike the Chromecast, it doesn’t depend on your phone.

1 Nama grants Ronan four-month extension on €160m glass bottle site deal
2 How long can Government afford to keep State pension age at 66?
3 Retailers accused of ‘stealing business’ from rivals by flouting restrictions
4 In praise of Gogglebox Ireland, an essential service in all but name
5 Outgoing Irish a sitting duck for Covid
Real news has value SUBSCRIBE