'Leaders need to be demanding of their people' 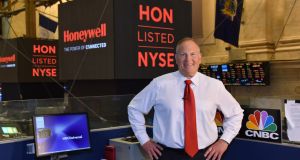 David Cote: he says leaders need to facilitate open questioning of everyone in an organisation, including those at the top

As one of the most successful US chief executives of his generation, Honeywell’s former boss David Cote has much advice to impart on running a large company, especially one requiring a radical turnaround.

Not a big fan of management books, he approached the task of writing his own with a different mindset.

“A lot of these books have 10 pages of content padded out into 250-page volumes. I wanted to write something that offered people practical advice on every page,” he tells The Irish Times.

The book, Winning Now, Winning Later, certainly achieves that. Cote doesn’t pull any punches either, recalling how he called out bad practice where he saw it and how he rigorously questioned his reports on the way they were running their divisions and challenged underperformers.

“Leaders need to be demanding of their people otherwise they will only achieve marginal results. People are capable of far more than they think possible,” he says, adding that that does not mean they have to be rude or heavy handed in the process.

“I always tried to pose my questions courteously, remembering how, as an employee, I responded better when leaders showed me respect rather than telling me I was wrong or barking out an order.”

Cote’s accomplishments are impressive by any standard. He inherited a deeply troubled company when he became CEO in 2002, along with a team of senior colleagues that were not entirely supportive, as he later confided.

Honeywell was a $22 billion loss-making conglomerate with interests in aerospace, control systems, automotive and chemicals. It was struggling following a botched merger with AlliedSignal three years earlier.

When Cote got to look properly under the hood he discovered a significantly underfunded pension scheme, game-the-system financial reporting, massive unresolved asbestos and other environmental liabilities, culture warfare, no globalisation initiatives, and a “make-the-quarter” mindset – “a train wreck on the verge of failure”, as he puts it.

Cote was not first choice to lead the company. Some in Wall Street and the financial media were sceptical about his credentials to run the troubled conglomerate.

Nonetheless, he confounded his critics. Under Cote’s leadership Honeywell’s market capitalisation grew to $120 billion, delivering returns of around 800 per cent, a level 2½ times greater than the S&P 500. He left the company in 2017.

Cote says intellectual laziness was endemic at Honeywell when he joined, and that he stepped into an organisation utterly incapable of probing the root causes of problems and advancing new and creative solutions.

“Lacking any drive to think about their businesses and unchallenged by leadership to do so, teams held meetings that were essentially useless, their presentations clogged up with feel-good jargon, meaningless numbers and analytic frameworks whose chief purpose was to hide faulty logic and make the business look good.

“When you did a bit of digging, you found that most executives and managers didn’t understand their business very well, or even at all.”

In the book Cote reveals a robust style of management in his time at Honeywell, and says that the better managers there responded well to vigorous challenge and debate.

“People respond to both carrots and sticks. Anyone who thinks a management style can be run on carrots, or run solely on sticks, is not going to do well because it’s just not human nature to say I respond to one or I respond to the other.”

Cote’s take on leadership is that it boils down to three things.

First, the leader must know how to mobilise a large group of people. Second, they must pick the right direction towards which the team should move, and, finally, they need to get the entire team moving in that direction to execute desired goals.

The key idea in Cote’s book is that short-termism and long-termism need to be balanced, and that far from being contradictory, these outlooks need to work in synch for the benefit of the organisation.

There is a weight of detail in the book about how Cote challenged flawed and woolly thinking and a culture of making the quarterly numbers at the expense of expanding the horizons of the business.

One anecdote tells how a plant manager made his numbers by cutting down the acres of trees around his production facility and selling them as timber, a trick copied by others in the company.

Another tells how a chemicals division manager suggested that he could not grow his business beyond its current $3 billion level. When asked how big the overall market was and on hearing it was worth $800 billion, he was challenged to find profitable niches in the remaining $797 million market, which he successfully did.

Strategic planning, once considered an annual event and then largely forgotten about for the rest of the year, was now kept on the agenda throughout the year with monthly reports.

Cote says that leaders need to facilitate open questioning of everyone in the organisation, including those at the top. He suggests the following tactic:

“If I had a small group of people I’d talk to them and 30 minutes into it, I’d say, ‘okay, so what’s the unasked big question here?’ When you go back to your office all your friends are going to wonder why you didn’t have the guts to ask him this. And it’s really interesting that when you ask it that way you start to get a different level of questions – the dam breaks.”

Cote believes that empowerment is necessary to grow a business but ultimately leaders need to ensure that there is execution.

“If there’s one thing I can’t stand it’s when I hear someone say, ‘well, you know, I just make decisions, then I have good people, and they make sure that things happen’. Well, that’s probably a good recipe for stuff not going well. As a leader you want delegation, not abdication.”

Another piece of advice Cote offers is to try to make some performance improvements each year while maintaining a fixed cost base. Aside from rewarding investors take some of the resulting profits to fund R&D initiatives, geographic expansion or process improvement, he suggests.

One of the key costs to watch is wages, which tend to grow by around 2 to 3 per cent each year assuming fixed headcount. Process improvements are the way to tackle this. “Organisations always push for more people. They don’t examine what they could stop doing or do better to make their existing staff more productive. Census constraints are vital to keep costs constant.”

Get buy-in from your team on big decisions: faced with actions that hurt employees managers often go into denial about the extent of the downturn. As a leader you can’t dictate solutions and expect buy-in. Give recommendations and let them share your conundrum.

Think big picture: Focus on the macroeconomic trends rather than just the detail of your own market. Make sure to talk to a lot of people outside your industry sector.

React quickly: Prepare for recessions even before the bad news hits by tuning into warning signals on the ground. Equally prepare for the upturn. Stay calm while others panic, and make sure your organisation is ready for the recovery.

Maintain your talent base: Use furloughs and avoid layoffs where possible unless they are permanent reductions. Research shows that layoffs lead to lower levels of innovation, lower morale, poorer performance among remaining employees and higher levels of customer defection.

Keep supplier relationships strong: Emerging from recession, supplier inventories are low as suppliers burn stocks to preserve cash. Anticipate this and plan accordingly so you are in a position to benefit from the recovery.

Look for opportunity: Recessions are a great time for mergers and acquisitions, for example, as the cost of acquisition is often significantly lower.

Winning Now, Winning Later, how companies can succeed in the short-term while investing for the long-term, by David M Cote is published by Harper Collins