Separately, 78 jobs are to be created at a new medical device cyber security company 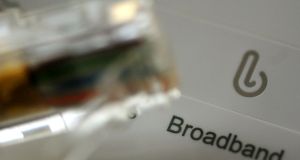 Irish telecoms provider Pure Telecom has signed a €1.75 million deal with sales agency DSM as it seeks to increase access to broadband across the State with a particular focus on rural Ireland.

The company has more than 45,000 residential customers and plans to more than double that number to 100,000 by the end of 2019. The deal will allow DSM to recruit 15 sales representatives to work on carrying out the task for Pure Telecom.

Pure Telecom has agreements with several of the Republic’s major wholesale telecoms providers, allowing it to bring broadband to residential customers as soon as fibre networks are laid.

As nationwide fibre rollouts continue, Pure Telecom said it required an “increased presence” of sales agents in key locations to help it achieve its growth plan.

All of the DSM positions will be field sales roles and candidates will require “customer-facing experience and a track record in achieving ambitious sales targets”, the company said. The sales representatives will receive ongoing training from DSM.

Pure Telecom chief executive Paul Connell said the deal was part of a “nationwide push” to bring broadband to more people and households in rural Ireland.

“We work very closely with some of Ireland’s major wholesale providers and want to ensure that we are there as soon as the broadband is.

“Part of that means having an increased presence of sales representatives and we are very confident that this deal with DSM will play a significant role in helping us to grow our business and footprint outside of the major cities.”

DSM chief executive Aidan Ryan said broadband across Ireland still had a long way to go, but that the company was looking forward to helping Pure Telecom “roll out the much-needed service across the country”.

Separately, 78 jobs are to be created over the next four years at a new medical device cybersecurity company.

Researchers from the Regulated Research Centre at Dundalk Institute of Technology have set up Nova Leah, which has developed a “cybersecurity risk management software application” aimed at medical device manufacturers and healthcare providers.

Nova Leah chief executive Anita Finnegan said the recent WannaCry ransomware attack on the UK’s NHS highlighted the importance of cybersecurity in the health sector. “Today’s medical devices incorporate high levels of software and are connected across networks, online or wirelessly,” she said.

“As a result, medical device manufacturers are facing two major challenges: ensuring compliance with stricter regulatory measures and minimising the probability of malicious breaches aimed at medical devices and healthcare IT networks.”