CoderDojo to merge with makers of €5 computer 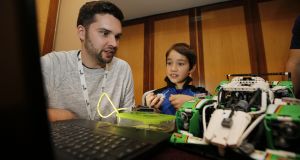 CoderDojo Co-Founder James Whelton and 9-year-old coder Michael Comiskey: Beginning with one club in Cork in 2011, the open-access programming movement has grown to become a global network of 1,250 clubs across almost 70 countries. Photograph: Nick Bradshaw

Irish tech charity CoderDojo is to merge with the Raspberry Pi Foundation, maker of the world’s only €5 computer, in a move that will create the largest educational coding network globally.

Executives from both organisations will jointly unveil the new partnership on Friday and the deal is expected to spur a quadrupling in the number of CoderDojo programming clubs for young people around the world by 2020.

Starting with just one club established by co-founder James Whelton in Cork in 2011, the open-access programming movement has grown to become a global network of 1,250 clubs across almost 70 countries.

It has been this huge Irish success story. This time six years ago CoderDojo didn’t exist, the whole space of children learning how to code and create was practically non-existent

However, the merger of Coderdojo and Raspberry Pi is expected to lead to the number of clubs growing globally to over 5,000 over the next three years, both organisations believe.

CoderDojo, which has a small Dublin-based office of just 10 full-time employees, will be able to rely on the support of 80 Raspberry Pi staff based in the UK and US across areas such as administration and finance.

In turn, Coderdojo staff will be freed up to concentrate on growing the movement more aggressively, according to CoderDojo executive director Giustina Mizzoni.

“It has been this huge Irish success story. This time six years ago CoderDojo didn’t exist, the whole space of children learning how to code and create was practically non-existent,” she said.

“[It] is the coming-together of two organisations that are very much leaders in this space globally, not just in Ireland and the UK, to create the world’s largest community teaching children how to code, so it’s really huge,” she added.

Both organisations will retain their respective names and governance structures, and implementation of the merger is expected to be completed by the end of this year subject to approval by the Charities Regulatory Authority.

The UK group is perhaps best known for its eponymously-named mini-computers Raspberry Pi and Raspberry Pi Zero, which are priced between €5 and €35 which makes the devices widely accessible.

Established in 2009, Raspberry Pi operates under a similar open-access ethos to CoderDojo and boasts an international network of coding clubs.

Raspberry Pi’s computers will not be freely dispensed to CoderDojo clubs as part of the deal, but its mentors worldwide will now have easy access to expertise from developers of the technology.

In addition, Coderdojo will have greater educational resources for programming.

Mr Colligan said he wants to help accelerate the growth of the CoderDojo movement while offering “world class” supports to its mentors.