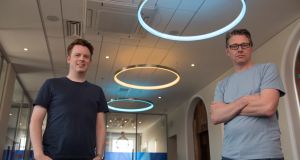 Plynk co-founders Clive Foley and Charles Dowd. “Most of the hires will be in Dublin and we’re looking for at least 20 programmers,” says Mr Foley

Dublin-based financial payments start-up Plynk has raised €25 million in a Series A fundraising round as it looks to roll out its money-messaging app globally.

The investment, which has been led by Swiss Privee, is one of the largest-ever Irish Series A rounds.

The company has also announced plans to increase headcount from eight to 28 over the next 12 to 18 months as the number of users it has in Ireland this week reached 6,000, easily surpassing its initial target of 4,000.

Co-founded in 2015 by Charles Dowd and Clive Foley, Plynk has created a money-messaging app that lets phone users chat one-on-one or in groups and to send or receive money instantly and without charge from within the chats.

“The money we’ve raised will be used to increase the size of the team and to roll out the product across the EU. Most of the hires will be in Dublin and we’re looking for at least 20 programmers. We envisage taking on other people, most likely in business development in other countries, as we launch the app there but Dublin is home and we aim to keep the tech here,” said Mr Foley, the company’s chief technology officer.

The Plynk app is primarily targeted at younger consumers. It has been developed to remove the complexities of money transfers among family and friends. The app, which is linked to users’s social networks, allows consumers to open payment accounts, get a card and make payments in euro, with other currencies to follow.

Once a Plynk account is created, users receive a dedicated IBAN and virtual Mastercard for online payments. In addition, the application plans to integrate with both Apple and Android Pay, enabling users to spend their money across multiple outlets.

“We see cash as our biggest rival but feel we have a leg up on it because you don’t have to be beside someone to give them some of it,” added Mr Foley.

Plynk has a licence to operate across the European Economic Area, which includes the EU along with Iceland, Liechtenstein and Norway. While only available in Ireland, the start-up intends to roll out its app in Spain over the summer with Portugal to follow shortly after.

“The aim is to run the company with an Irish heart but with a Silicon Valley approach to things and our primary motive right now is growth,” said Mr Foley.

“Our next target is to roll out in at least two other countries and hit five figures in terms of users within the next 12 months. Spain is an obvious choice for us as it has a similar demographic to Ireland and the same currency,” he added.

The Plynk app was developed over 15 months at the Bank of Ireland Workbench in Grand Canal Square. Last year, the start-up raised €725,000 in seed funding from a number of sources, including BoI, Delta Partners, Enterprise Ireland and the National Digital Research Centre.