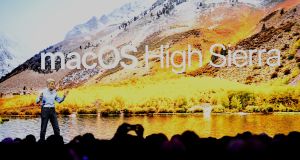 Technology giant Apple upgraded most of its Mac computers on Monday, including a powerful new offering for professional users, showing renewed commitment to a product line that critics say it neglected amid lackluster growth.

The iPhone remains Apple’s most important product by far, but the company needs a range of devices to keep consumers locked into its profitable and growing ecosystem of services and apps. That means updating products for some markets that aren’t growing as fast as they once did.

The PC market, where Apple is fourth, grew less than 1 percent in the first quarter, compared to a year earlier, according to research firm IDC.

The company’s Mac revenue fell last year, and while well received by many consumers, recent MacBook Pros have been criticised by some longtime Mac loyalists and creative professionals for not meeting some of their needs.

Apple has acknowledged that it needs to do better and addressed some of these concerns by unveiling a new iMac Pro with super-fast Intel Xeon chips, Advanced Micro Devices Inc’s Radeon Vega graphics processor, and up to 128 GB of pre-installed RAM. Starting at $4,999, it’s the most expensive and powerful computer Apple has made.

The Mac upgrades are Apple’s first to the MacBook Pro since the computer was revamped last fall with a slimmer design and the Touch Bar touchscreen strip on the keyboard. The 12-inch MacBook was last updated earlier last year with faster chips and a rose gold colour option.

Alongside the Mac hardware upgrades, Apple also is discussing software updates to both at its conference this week. The new operating systems are expected to be released in the autumn.

Apple chief executive Tim Cook also announced that content from Amazon Prime Video, long absent from the Apple TV product, would come to Apple devices such as the TV, iPhones and iPad later this year.

Apple kicked off its conference by unveiling a “Siri face” for the Apple Watch that will enable the voice-activated assistant to provide users with information such as commute times for upcoming appointments.

Apple was expected to unveil improvements to Siri, its digital voice assistant that competes with Amazon’s Alexa and the Google Assistant helper.

The Siri face for the Apple Watch was the first step in that direction, blending users’ calendar information with other useful details, like airline tickets they may have booked. While Siri was previously available on the Apple Watch, the assistant’s ability to automatically show information was limited.