Saying goodbye to the SETI@home screensaver

Web Log: It was one of the first large-scale citizen science projects available on the web 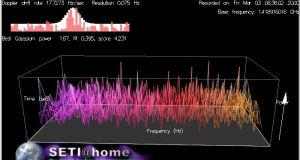 SETI@home is winding down after 21 years

SETI@home, which began in 1999, was one of the first large-scale citizen science projects available on the web. Created by the University of Berkeley, California, it is a programme that runs as a screensaver on the end user’s computer while analysing data in the background, cleverly tapping into the available computing power of hundreds of thousands of people around the globe.

The data in question is gathered by Berkeley’s SETI (Search for Extra-terrestrial Intelligence) research centre and consists of many thousands of hours of data captured by radio telescopes in the hopes of finding transmissions or some other evidence of intelligent life beyond earth.

With no signs of ET in sight, this citizen science-powered project is winding down on March 31st, but keep your eyes peeled for a research paper based on analysis of 21 years’ worth of radio data.

“Scientifically, we’re at the point of diminishing returns; basically, we’ve analysed all the data we need for now,” explains SETI@home on the official blog.

“It’s a lot of work for us to manage the distributed processing of data. We need to focus on completing the back-end analysis of the results we already have, and writing this up in a scientific journal paper.”