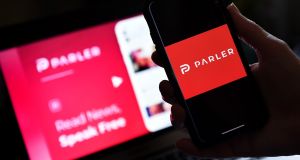 Parler, the conservative social media platform whose traffic has surged amid a crackdown on inflammatory content by its rivals, sued Amazon. com for ending web-hosting service for the site in the wake of rioting at the US Capitol last week.

The self-described “microblogging alternative and competitor to Twitter” was offline early Monday morning after Amazon’s cloud services division stopped providing the service. Apple and Alphabet’s Google had withdrawn Parler from their app stores over the weekend.

Amazon’s action “is the equivalent of pulling the plug on a hospital patient on life support,” Parler said in a lawsuit filed Monday in federal court in Seattle, seeking an order forcing Amazon Web Services to maintain its account. AWS “will kill Parler’s business – at the very time it is set to skyrocket,” according to the suit.

Amazon said there was no merit to the claims.

“AWS provides technology and services to customers across the political spectrum, and we respect Parler’s right to determine for itself what content it will allow,” the company said in an emailed statement. “It is clear that there is significant content on Parler that encourages and incites violence against others, and that Parler is unable or unwilling to promptly identify and remove this content, which is a violation of our terms of service.”

The lawsuit comes amid longstanding battles between President Donald Trump and social media platforms like Twitter and Facebook that have thrived on his populist messages but have also been severely criticised for enabling him. Many Trump supporters have moved to Parler to avoid what they see as censorship by Twitter.

In the suit, Parler alleges an antitrust infraction.

“Less than a month ago, AWS and Parler’s competitor, Twitter, entered into a multi-year deal,” according to the suit. “Late Friday evening, Twitter banned President Trump from using its platform, thereby driving enormous numbers of its users to Parler. Twenty-four hours later, AWS announced it would indefinitely suspend Parler’s account.”

AWS said in its statement it made its concerns over content inciting violence known to Parler for several weeks. “During that time we saw a significant increase in this type of dangerous content, not a decrease, which led to our suspension of their services Sunday evening,” the company said.

Parler claims that by suspending its account, AWS “will remove from the market a surging player, severely restraining commerce in the microblogging services market”.

Alan Sykes, a professor at Stanford Law School, said if it turns out that Twitter prevailed on Amazon to ban Parler, the microblogger’s complaint could amount to a legitimate antitrust claim.

Amazon’s decision to remove Parler for its potential to foment violence “is a non-anticompetitive, legitimate reason to take someone off the web service”, Mr Sykes said. “Whoever hears the case will have to decide whether the plaintiffs made out a plausible case of conspiracy between Amazon and Twitter.”

“This concern for violence might justify taking Parler off for a while, but it’s not clear that it could justify a permanent ban,” Mr Sykes added. After Mr Trump leaves office and the dust settles, “if Amazon continues the ban indefinitely, that would strengthen the inference of a conspiracy.”

Parler is asking US District Judge Barbara Rothstein to act immediately and issue a temporary order to keep the site going while the litigation plays out. Judge Rothstein, who was appointed by President Jimmy Carter, set deadlines for the two sides to submit briefs Tuesday and Wednesday.

Parler also claims that AWS broke its contract, which it says requires more notice of termination, and illegally interfered in its relationship with its customers. In addition, Parler accuses AWS of “political animus,” saying the company took no action against Twitter while the rioters’ chant phrase “Hang Mike Pence” was a top-trending tweet.

In the week after Election Day, November 3rd, Parler became the top free app in Apple’s iOS App Store, up from number 1,023 just a week earlier, according to the suit. It said installs increased 355 per cent after Twitter said it would permanently ban Trump.

AWS is by far the largest cloud-computing provider, and its on-demand software services are the backbone for many of the most popular internet services. Parler has “no other options” to be on the web, it said. – Bloomberg