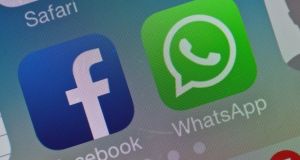 The Irish arm of WhatsApp last year set aside €77.5m to cover possible fees linked to an investigation undertaken by the Data Protection Commissioner into the sharing of data by the platform with its parent

The Facebook-owned platform, which has more than two billion users globally, has updated its terms of service in a move that has led to widespread confusion about its future plans.

Multiple media organisations reported that WhatsApp users were effectively being given an ultimatum: agree to share personal data such as contacts, phone numbers and photos with Facebook by February 8th or stop using the messaging service.

However, WhatsApp’s Irish arm, said on Thursday that although users in Europe are in the process of being issued new terms of services to which they must agree, the revised agreement did not include data sharing.

“There are no changes to WhatsApp’s data-sharing practices in the European region arising from the updated terms of service and privacy policy. For the avoidance of any doubt, it is still the case that WhatsApp does not share European region WhatsApp user data with Facebook for the purpose of Facebook using this data to improve its products or advertisements,” a spokeswoman said.

In a series of tweets Niamh Sweeney, WhatsApp’s director of policy for Europe, the Middle East and Africa, said: “The latest update to our privacy policy is about providing clearer, more detailed information to our users on how and why we use data.

WhatsApp said any plan to share data with Facebook or other group companies would only be done once the company had agreed this with the Irish Data Protection Commission, which is the lead regulator for the service in Europe.

Any such move to change data sharing arrangements, would represent an about-turn by Facebook, which sought to assure WhatsApp users that their data would remain private when it acquired the company for $19 billion in 2014.

Part of what led to WhatsApp’s rise in popularity was its promise not to share users’ personal information, something that Facebook recognised when it acquired the business.

Under a revised user agreement issued two years after the purchase, it sought to get users to agree to the sharing of information with the social network, although with an option to opt out of the move.

The Irish arm of WhatsApp last year set aside €77.5 million to cover possible fees linked to an investigation undertaken by the Data Protection Commissioner into the sharing of data by the platform with its parent.

The commission last year submitted its preliminary decision to WhatsApp Ireland with a a final verdict expected to be announced shortly.

WhatsApp co-founder Brian Acton, who has been critical of Facebook in recent years, admitted to selling his users’ privacy when he sold the company to the social network.

“I sold my users’ privacy to a larger benefit,” Mr Acton told Forbes in November 2018. “I made a choice and a compromise. And I live with that every day.”

Mr Acton left Facebook in 2017, before his stock fully vested, in a move that cost him an estimated $850 million.