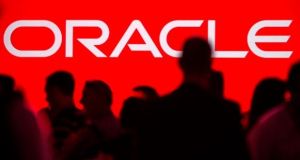 Oracle attributed the increase in losses in part to a €243.5 million revenue decline, and to a €318.5 million impairment charge on undisclosed assets.

However, despite the sharp rise in losses the company paid a €2 billion dividend to its immediate parent group, which is also based in Dublin.

The company attributed the increase in losses last year to a €243.5 million revenue decline and a €318.5 million impairment charge on undisclosed assets.

There was a shareholders’ deficit of €265 million at the end of the year, compared with a €2.2 billion surplus a year earlier.

Oracle said it invested €39.3 million in research and development activities last year, up from €35.9 million in 2016.

The group’s Irish unit, the head office of which is in Dublin’s East Point Business Park, employed 1,456 people during the year, with staff costs totalling €124 million, as against €132.5 million in 2016.

Oracle is the world’s largest provider of enterprise software and one of the biggest for computer hardware products and services. In recent years it has expanded its business in a move that has led it to move away from databases to become a leading cloud computing firm.

Oracle Corporation, which was founded by Larry Ellison, Ed Oates and Bob Milner in 1977, has a market cap of more than $190 billion and annual revenue that tops $37 billion.

1 Are there annual limits on inheritances or gifts to a child?
2 US threatens retaliation against EU over proposed carbon tax
3 Comcast acquires Irish cloud-based telco Blueface
4 Money matters: ‘My father embarrassed us with his haggling’
5 Pilita Clark: When a rude boss keeps you waiting, why not walk out?
Real news has value SUBSCRIBE