Bank has committed $200m to Republic’s innovation sector since 2012 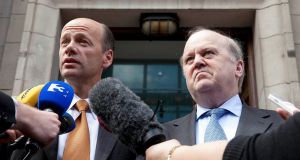 Silicon Valley Bank has hit its $100 million (€86 million) investment target in Ireland, only two years after it announced it would commit the money to support Irish-based businesses.

The funding has also been deployed at a faster rate than first anticipated, with Silicon Valley Bank initially committing to allocating the $100 million over a five-year term. The plan was in collaboration with the Ireland Strategic Investment Fund.

It brings to $200 million (€172 million) the total amount the bank has committed to the innovation sector in Ireland. Silicon Valley Bank said in 2012 it planned to commit $100 million over five years to the Irish sector, in collaboration with the National Pensions Reserve Fund. It also opened its Irish office, with Clive Lennox heading up the operation here as director of Irish Business Development.

“We’ve reached and surpassed that [$100 million funding] now,” he said. “It’s quite a big milestone for us. I think about $220 million is about where it sits now.”

Among the companies that have benefitted from Silicon Valley Bank’s involvement in the Irish market are Accuris, Boxever, Movidius, Profitero, Glofox, AMCS, Logentries and Learnosity.

Another of its portfolio firms was Clavis Insight, which was acquired by Ascential last December for €100 million.

What is next for Silicon Valley Bank in Ireland is currently under discussion, Mr Lennox said.

“We’re committed to the Irish market and we’re having ongoing discussions about our next step,” he said. However, with the bank currently helping to get Irish companies in front of US funds, Mr Lennox said they are also examining how things could expand beyond providing debt financing and credit facilities.

“My role is to get to know the best companies, the best CEOs,” he said. “It’s about getting the best funds in front of the best companies and vice versa, and what can we bring into town to be more than just the straight lending?”