Why do we continue to put our trust in Facebook and Google? 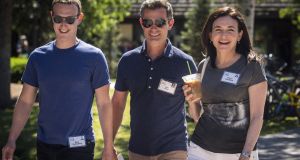 It hasn’t been a good week for the overlords of the internet.

On Tuesday, Facebook was exposed by the Channel 4 Dispatches programme for flouting its own much-vaunted content standards. The company has been at pains recently to emphasise a renewed focus on responsible content moderation, following numerous scandals, from the Cambridge Analytica data breach to its “who, us?” failure to notice it was facilitating Russian attempts to influence US voting.

Since then Facebook has indeed worked to make users more aware of privacy controls and reporting tools. Promising – as far as it goes. But that is not far enough. Channel 4’s undercover report showed yet another hidden side of the company – helping explain why so much appalling content still seems to litter the site – the company and its moderation subcontractors knowingly facilitate a disturbing range of content.

Facebook has stated it is “taking steps immediately to rectify” such “issues” as the fact that a video of a horrific child beating has been circulating on the site for a long time, even after being reported on multiple occasions. Facebook’s defence has made no sense at all. The argument that the video helped Malaysian police find and prosecute the adult perpetrator? Come on – videos and images can be forwarded to law enforcement, and deleted online. It’s hardly “educational” for such disturbing images to remain accessible except in the most exceptional cases.

The trainers noted that what offends and revolts also gets clicks

And while Facebook has insisted that many of the questionable items shown on the programme did violate their standards, and should have been removed, the standards revealed in the training materials indicated otherwise. A lot of us will spend a long time wishing we could unsee the slide that noted a wide variety of human torture and death – from dismemberment to beheadings to body mutilation to burnings – oh, all of those could remain online. I thought I had to be misreading. But no.

The Dispatches undercover reporter spent weeks in a Facebook moderator training programme run by Dublin company CPL, which contracts to do the majority of Facebook’s moderation of UK and Irish content. The moderators were inside Facebook’s Dublin offices. The training slides, with guidance on how to assess what to do with a piece of content, surely are supplied by Facebook with course content actively overseen by the US firm. The trainers noted that what offends and revolts also gets clicks and shares from some of the heaviest users of Facebook. And that drives advertising. And therefore Facebook income.

Meanwhile, the day after the Dispatches programme, while everyone was focusing on Facebook, Google got slammed with a breathtaking €4.3 billion fine for illegally tying searches on mobile handsets to its Android platform (which is on 80 per cent of mobiles), by requiring manufacturers to make Google’s Chrome browser the default handset browser.

Google immediately said it would appeal the ruling, and Google Europe tweeted about how Android “has created more choice for everyone, not less”. And that 1.6 million developers in Europe use Android to help “build businesses with a global reach”. For anyone with a long memory – and really, that must include some on the Google board and executive team – both the basis of the fine and these kinds of statements echo the US Department of Justice v Microsoft antitrust case of the late 1990s.

That would be the case that found that Microsoft improperly tied its Explorer browser to its Windows platform, which ran on over 80 per cent of home computers back then.

Microsoft at the time made arguments that businesses and developers benefited from this cosy browser and operating system arrangement. They could more easily innovate, because everything was designed to work together (or, you might say, not work as well with anything else). And that would help businesses grow, because they were all on Windows too.

So Google will appeal. But, as EU competition commissioner Margrethe Vestager said on Wednesday, this arrangement allowed Google to “to cement its dominance as a search engine” in violation of EU antitrust laws.

Bundling the browser really does not offer any choice, she said, because most people will only ever use what is preinstalled, which is working out nicely for Google, because “to slightly paraphrase what [US economist] Milton Friedman has said: ‘there ain’t no such thing as a free search.’” In other words, it’s very handy for Google to have all that data generated by its Chrome browser coming back to Google, rather than going to some other browser company.

The next big question here is: will the US, which now has established case law in exactly this area, pursue Google on similar grounds? The biggest question of all remains: why do we – at national and individual level – continue to cede so much control to these secretive companies?