Chipmaker employs 4,900 here, most at flagship facility in Co Kildare 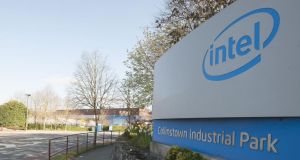 Since Intel first set up operations in Ireland in 1989 with its flagship facility in Collinstown Industrial Park, in Leixlip, Co Kildare, it has invested close to €14 billion locally. Photograph: Dave Meehan

Intel wasn’t the first multinational firm to establish operations here, but it’s easy to argue they were the driving force behind the development of the Irish tech sector. The company has arguably gone far beyond all others in terms of its commitment to Ireland.

Since Intel first set up operations here in 1989, it has invested close to €14 billion locally. It employs 4,900 people here, most of whom work at its flagship facility in Collinstown Industrial Park, in Leixlip, Co Kildare.

“There are legends built around those in IDA Ireland who helped to bring Intel to Ireland. The company’s decision to come here was seen as a massive win for the country. They were a landmark client then and are still very much one for us now,” says Leo Clancy, head of technology, consumer and business services at the State agency.

“We already had a play in semiconductor parts with Analog Devices in Limerick, but Intel was very much the dominant force in PCs so winning them to Ireland was hugely significant. The investment made by the company over the years dwarves that of many others and for us to be able to highlight just how much faith Intel has shown in Ireland is invaluable,” he adds.

According to Bernard Durkan, the Fine Gael TD who first won the Kildare North seat for Fine Gael in 1981 and who is still a local representative, the arrival of Intel led to huge changes to the area.

“The impact of Intel’s decision to establish a base in Leixlip was massive because of the size of the operations relative to the size of the Irish economy,” said Durkan.

“I remember having visited Stuttgart in Germany three years earlier and being amazed at the impact of Mercedes on the local community. It was very much the anchor tenant employing thousands of people and having a huge influence on the community. Intel became our Mercedes,” he adds.

As a former chairman of the local authority, Durkan remembers there having been a huge debate about what to do with the site prior to Intel taking it.

“It was IDA-owned land and they wanted it to be kept available for investors because it was a good location that was near to a big college and also relatively close to the airport and other services. There were a lot of people locally who played a big role in helping to get it over the line in terms of planning and so on,” he says.

“Intel has been great for the region, not just in terms of job creation, but also because of the company’s desire to be part of the local community in everything from sports and Tidy Towns to helping to restock the local river. We were delighted when they first chose Leixlip, because they had plenty of options available to them, and we remain proud to have them here,” adds Durkan.

The Intel site was initially focused on producing motherboards – the main printed circuit boards for PCs – but has progressed far beyond that. In recent years, however, the company’s presence in Ireland has been somewhat overshadowed by the arrival of internet giants such as Google and Facebook.

“Intel’s arrival into Ireland was a critical event in terms of the development of the technology sector here and for many years they would have been at the centre of that sector,” says Dr Dr Louis Brennan, professor in business studies at Trinity College Dublin.

“With the advent of the born-on-the-internet companies, the significance of Intel in the Irish context is not as great as it once would have been, but that isn’t to say it doesn’t continue to be an important player,” he adds.

According to Dr Brennan, the fact that Intel still has a manufacturing site here and deep links with the third-level sector serves as an important signal to prospective investors into the country.

“It shows that Ireland has human capital that is highly skilled and technologically sophisticated,” he says.

With such a heavy focus on personal computer chips, Intel largely missed the transition to mobile. It has since sought to rectify this ground it lost by making waves in newer technologies such as the Internet of Things.

“Intel is certainly no has-been. It has a fantastic workforce and an enviable tradition of invention and innovation, and that is something that stands to a company even as it seeks to navigate tricky waters,” insists Dr Brennan.

He also believes that while a number of recent investments have been outside of Ireland, the country is still very much in play for future wins.

“The Irish operation has an excellent reputation within Intel and that is an advantage in terms of future decisions. It has proven itself in the past and because Ireland is still an attractive environment for talent, taxation and so on, it is still very much in with a chance on new investments,” says Dr Brennan.

Intel was granted permission for a new manufacturing facility at its Leixlip site late last year, which Dr Brennan takes as a sign that the company is still open to increasing its presence locally.

“The Irish operation continues to stay ahead in terms of planning permission in anticipation of future wins and local management is certainly not asleep at the wheel when it comes to preparing for new investment,” he adds.