Athlone Ventures has been set-up by Brendan Morrissey, a former musician 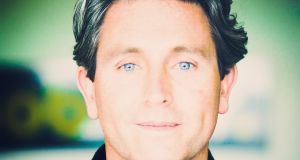 Brendan Morrissey: “Every rockstar wants to be a billionaire techie and every techie I know wants to be an adored rockstar”

Brendan Morrissey, founder and chief executive of Mobstar, an app that is being used to conduct the public vote in this year’s Miss World competition in China, has teamed up with British businessman Jojar Dhinsa to establish Athlone Ventures.

The fund, which has been designed to accelerate the growth of tech and digital startups, is seeking to fund up to 15 companies a year by investing in them at Seed and Series A stages.

“We invest in people. You can have the best idea in the world but if you can’t execute it’s pointless. That is something you can’t teach. You either have it or you don’t,’” Mr Morrissey told The Irish Times.

“We’re looking at seed and early round investment across all sectors of business to find disruptive tech plays founded by passionate entrepreneurs who can deliver,” he added.

Mr Morrissey was previously a founder member and lead guitarist with My Little Funhouse, a rock band from Kilkenny that signed a $2 million deal with Geffen Records in the early 1990s and which supported the likes of Guns N’ Roses.

His other businesses include ProTunes, an LA-based global music licensing programme whose clients include Omnicom, BBDO and Ketchum, and a popular elearning platform known as eSchools. Mr Morrissey is also behind BARE in the Woods, a one day music festival in Ireland which is set to return to Co Carlow next year.

Mr Morrissey said he was personally interested in social enterprise projects “that make a difference.”

Mr Dhinsa meanwhile is a Coventry-born businessman who had amassed a reported £40 million fortune by the age of 29. He is the founder of the Athlone Group, a company with annual sales of $15 billion whose investment portfolio covers oil, gas, construction, real estate, technology, education and finance.

“Jojar and I are old acquaintances. We both worked in commodity trading and reconnected on a project that I’m building called iDyslexic that will support Dyslexic and ADHD communities,” said Mr Morrissey.

The new fund opened last week and Mr Morrissey said he has already received a number of applications.

He said the fund was interested in Ireland praised the start-up scene here. However, he added that support was often hard to come by for the country’s “world-class” entrepreneurs.

“The State bodies are mainly focused on manufacturing and export and don’t see the value of building a consumer user base,” he said.

Mr Morrissey, who has had a varied career since his band split with time spent doing everything from commodity trading to working in fashion and opening a string of bars and clubs, said he agreed that entrepreneurs are the new rock stars.

“Every rockstar wants to be a billionaire techie and every techie I know wants to be an adored rockstar. The music business is now obsolete so tech has become the new business connecting fans with talent,” he said.