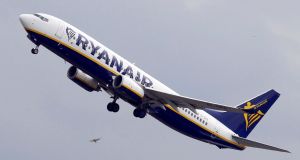 Ryanair said terms of the settlement would remain confidential

Ryanair reached a settlement with Google and online travel agent eDreams to end legal proceedings in the High Court over what it said were misleading advertisements for Ryanair flights, the airline said on Thursday.

Ryanair accused Google in 2015 of allowing eDreams to use “misleading” subdomain ryanair.edreams.com and a website with branding similar to Ryanair’s to sell air fares at higher prices than on the Irish airline’s own website.

The airline said terms of the settlement would remain confidential.

Ryanair, Google and eDreams said in a statement they were pleased to have resolved the issue.

1 Retailers accused of ‘stealing business’ from rivals by flouting restrictions
2 In praise of Gogglebox Ireland, an essential service in all but name
3 Outgoing Irish a sitting duck for Covid
4 Nama grants Ronan four-month extension on €160m glass bottle site deal
5 How long can Government afford to keep State pension age at 66?
Real news has value SUBSCRIBE