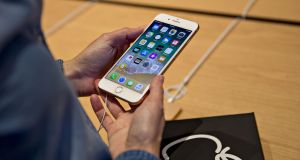 While mcommerce is growing, Irish businesses are seen to be missing out with just 42 per cent of survey respondents saying they purchased goods or services from local businesss

Irish consumers are increasingly using their smartphones to shop online with one in five young people spending between €100 and €500 a month buying goods in this way.

The research shows over three in four mobile users shop online once a month using their phones with one in every two respondents shopping two to four times a month.

The survey of over 1,000 people was carried out by Amárach Research on behalf of mobile provider Three Ireland.

More than half of those surveyed said they spent up to €50 a month buying goods and services online throught their smartphones. Some 23 per cent admited to shelling out between €50 and €100 over the same period.

The study finds women are more likely to make purchases online with their phones.

While mcommerce is growing, Irish businesses are seen to be missing out with just 42 per cent of survey respondents saying they purchased goods or services from local businesss.

Three said the figures show there is a significant opportunity for indigenous firms to boost sales by engaging with potential customers’ through their smartphones.

Some 61 per cent of survey respondents expressed an interest in being able to connect their home security system to the internet and control it via their mobiles. Those surveyed were also keen on getting the chance to be able to monitor electricity usage, control the heating and make minor payments through their phones.

Commenting on the survey, Robert Finnegan, CEO, Three Ireland said: “ This research gives us great insight in to the mobile evolution of Ireland’s economy and society. ”

1 Should I switch bank now with Ulster Bank at risk of closing?
2 Tick all the right boxes when it comes to your house insurance
3 Belfast mailbox address used by account holder in Russian money-laundering scheme
4 Finance Ireland refinances mortgages with low level of payment breaks
5 Aldi empire wracked by family feud
Real news has value SUBSCRIBE