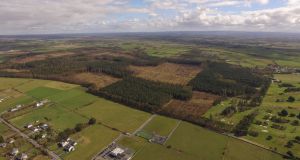 The site of the proposed €850m Apple data centre at Athenry, Co Galway, which has been approved by An Bord Pleanála. Mr Justice Paul McDermott has set the date of October 25th to hear objectors’ applications for leave to appeal the decision

An appeal is being sought against a judgment permitting US tech giant Apple to develop the first phase of a planned €850 million data centre in Co Galway, a High Court judge was told on Tuesday.

Before any appeal can be taken, permissions must be obtained from the court. An application for permission will be heard on October 25th but may not conclude then and may have to resume later.

Mr Justice Paul McDermott, in separate judgments last Thursday, rejected two judicial review challenges to An Bord Pleanála’s August 2016 permission for a data hall at Derrydonnell in Athenry, the first of eight such halls Apple may build over a 15-year period.

The first challenge was by local residents Sinéad Fitzpatrick and Allan Daly, of Lisheenkyle, Athenry, whose concerns included the potential environmental impact of the entire development, particularly about greenhouse gas emissions.

The judge found the board and its inspector considered and assessed the potential environmental impact of the overall Apple “masterplan” and disagreed the board was required to carry out an Environmental Impact Assessment (EIA) of the entire proposed project.

Their counsel Oisin Collins said on Tuesday that his clients intended to seek a certificate for leave to appeal.

When the judge said he was ready to hear arguments concerning the application, counsel said he wanted time to consider the matter.

Nuala Butler, senior counsel for the board, said Mr Collins should outline within a week the point of law he intends to raise, after which her side would provide written submissions.

The judge proposed a time from 9.30am to 10.45am on October 25th to hear the matter as he has other cases later that day. Mr Collins said it may not be possible to deal with the matter within two hours.

In his judgment on the second case, by Brian McDonagh of Ballymount Cross Business Park in Dublin, he found Mr McDonagh lacked the necessary legal standing to challenge the permission as he does not live close to the site and had not participated in the planning process.

Mr McDonagh should have disclosed at an early stage he was a director and shareholder of Ecologic Data Centre Ltd, which had secured permission for a data centre on a Co Wicklow site considered as an alternative location for the Apple development, the judge added.

Mr McDonagh said on Tuesday he has still not decided whether or not to seek leave to appeal. The judge said he would list his case also for October 25th.

The judge had listed the cases for mention before him on Monday but, due to the closure of the courts as a result of Storm Ophelia, the matter was relisted for Tuesday.

Appeals concerning a planning decision may be brought via two possible routes.

The first arises if the judge who heard the case agrees to certify an appeal to the Court of Appeal on the basis that their judgment raises a point of law of exceptional public importance, which it is necessary, in the public interest, to have determined.

The second route is via an application to the Supreme Court for permission for a “leapfrog” appeal directly to that court. The Supreme Court may permit such a route – one bypassing the Court of Appeal – if it considers the case involves a point of law of general public importance or one necessary, in the interests of justice, to determine.