MyTaxi chief says Hailo change could have been ‘handled better’ 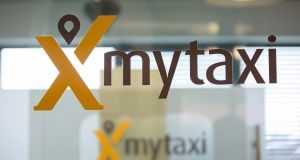 The chief executive of MyTaxi has admitted the company could have handled the migration of customers over from the much-loved Hailo app better but said most of the problems had now been ironed out.

Speaking on the fringes of the Web Summit, Andrew Pinnington also said the group is looking at rolling out a number of new services in Ireland shortly. These include a new pooling service known as MyTaxi Match that allows passengers travelling in the same direction to share a cab home.

Hailo officially rebranded as MyTaxi in early March, following the all-share merger with Daimler’s subsidiary last August, in a deal that created Europe’s largest e-hailing company with some 10 million registered users across 70 cities in 11 countries.

The migration of Hailo to MyTaxi hasn’t been as seamless as the company hoped, with both customers and drivers expressing frustration over missed bookings, car shortages and so on.

A decision to introduce a €2 booking charge in September in order to attract more drivers to the service also angered customers, coming as it did before many of the problems experienced by users had not yet been resolved.

“We were realistic that moving from Hailo to MyTaxi would be difficult. We knew it was going to be a bumpy ride, especially given that it was a big technical challenge. I dare say that if we did it again, we’d do it better,” said Mr Pinnington.

He added, though, that six months after the rebrand, MyTaxi expects to carry four million people in Ireland during the fourth quarter, which Mr Pinnington said was “significantly above anything Hailo ever did”.

Mr Pinnington said Ireland is MyTaxi’s second-biggest market, with the company seeing plenty of room for growth locally still, given over half of people in Ireland still phone for taxis rather than booking them through apps.

“[The MyTaxi app] is not as beautiful as Hailo was, but we’re doing something right given our growth pattern. I would be the first to hold up my hands and say there are things we could have done better but we have listened to feedback and as a result are introducing a number of technological developments based on information we’ve received from users in Ireland,” he said.

Mr Pinnington also said the company had been trialling its new MyTaxi Match service in Warsaw, Poland, and hoped to introduce this in Ireland shortly.

He said this would help ease supply issues at peak times that have arisen largely because of driver shortages.

MyTaxi has introduced a number of initiatives recently to boost driver numbers in Ireland. These include offering a total of €1 million in incentives to drivers to join its fleet, and the rolling-out of a learning platform to help entrants prepare for the small public service vehicles (SPSV) test.

One less popular move was the €2 booking charge, which Mr Pinnington said had been introduced as it was found to be the main reason why drivers weren’t staying with MyTaxi.