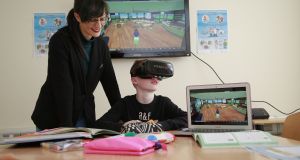 Internet safety start-up Zeeko is to evaluate the side effects of virtual reality (VR) technology on children’s health after securing €100,000 in funding.

Zeeko, which was founded in 2013, works with parents and children to promote a healthy balance for children using screen devices and the internet. The company, headquartered in UCD, received the funding through the Horizon 2020 SME Innovation Associate Programme.

The company said that due to the affordable costs of VR hardware, the technology is “increasing in popularity” with children.

To date, a relatively small number of studies have been conducted on VR involving children. Some of these studies, mainly conducted in the USA, have shown that VR can efficiently support a child’s learning.

Others have shown that VR can be employed to treat children’s emotional and relational problems such as depression and anxiety.

Zeeko’s project will recruit a group of teachers, parents and children, aged 10 to 12 years, through primary schools in Ireland, to participate in an ethnographic study.

The study will be carried out both in schools and in home environments using techniques previously tested for the study of children’s use of digital devices.

Children’s activities with VR will be video recorded in different everyday life scenarios, such as lessons at school, completing homework, and leisure time.

The recordings will then be discussed with the children to explore their subjective experiences. Parents and teachers will also be involved in group discussions and interviews to examine their opinions, interests and concerns about the potential of VR as an educational tool.

Zeeko head of research Marina Everri said “very little is known” about the impact of VR on body, cognition, and social relations, especially during a child’s development.

“More research, such as the research we are about to commence, is needed to understand the interplay of children’s individual characteristics, their relational and cultural context, and the opportunities and challenges offered by VR technology,” she said.