How come we put a man on the moon but can’t cure cancer? 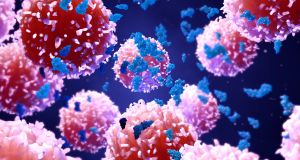 Medically inclined mathematicians are few and far between. Of those that are around, however, quite a few have been trying to crack the code on the Big C. Photograph: iStock

In 1961 American president John F Kennedy predicted the United States would send a man to the moon within a decade.

Exactly 10 years after that, president Richard Nixon signed the National Cancer Act into law, declaring the same energy and resources that made the moon landing possible would be applied to finding a cure for the disease.

JFK was vindicated. Five decades on and we are still waiting for Nixon’s cancer conviction to be realised.

No doubt there are myriad viewpoints as to why this might be the case– ranging from the unfair comparison to the downright conspiratorial. But I’ll wager there are few out there thinking it had anything to do with theoretical physics.

Around the same time Kennedy “chose to go the moon”, physicist Ernest Wigner wrote an article that referred to the “unreasonable effectiveness” of mathematics when applied to the seemingly chaotic natural world. Wigner, like most mathematicians, believed mathematical concepts could be applied far beyond the contexts within which they were originally developed because they so often lead to “amazingly accurate descriptions of a large class of phenomena”.

According to a small but vocal group of scientists and mathematicians, the fundamental difference between Kennedy successfully predicting the moon landing and Nixon’s empty declaration (Tricky Dicky even stated that the National Cancer Act would be his lasting legacy as president), is that a mathematical theory for gravity was known for almost three centuries by the time Kennedy made that speech. In 1971, however, there was no mathematical theory for cancer.

Isaac Newton’s Laws of Motion enabled Nasa’s engineers to design a rocket that could rely upon the Earth’s momentum and the moon’s gravitational pull to help land Apollo on the moon as well as return the crew safely back home.

It’s not a stretch to ask why a similar approach has not been taken to battling a disease that will kill a third of us eventually. Without a mathematical equation, proponents say, we are relying on trial and error.

For the mathematically inclined this is analogous to launching thousands of rockets and observing any common patterns noticed in terms so speed, velocity, direction taken by the rockets in order to find the optimal combination of parts to make a spaceship capable of reaching the moon. Absurd, but this is what some believe is happening in the fight against cancer.

In the US much of the medical research funding from organisations such as the National Science Foundation is going into medical research focused on the potential of “big data” as a solution. Opponents argue there is only so much you can do with mountains of data. Finding patterns in data won’t help find effective new treatments.

A handful of enthusiastic researchers around the US are focused on developing a mathematical theory for cancer, which relies on patient-specific differences. The idea is to develop mathematical equations describing how tumours grow but also how they respond to various treatment approaches using established physics and biology.

The idea, then, is that each individual patient’s data can define the parameters of any mathematical model. A bespoke mathematical model can therefore provide tailored predictions of various outcomes for each patient.

Put another way, oncology – as we know it – would move from a population-based approach where diagnoses and treatments are shaped by “best-case scenario” data from other patients with similar conditions to a patient-based model where an individual’s data would be the guiding determinant for any expert opinion.

Medically inclined mathematicians are few and far between. Of those that are around, however, quite a few have been trying to crack the code on the Big C.

For now, proponents of this mathematical approach to cancer treatment are still deciding upon the “best” equations for describing the disease, after which they hope to test such equations on real patients.

But getting the maths right is the easy part. Getting anybody to listen in the US amid the clamour about “big data” and “machine learning” as the panaceas for cancer is extremely difficult.

Any advances for the mathematical approach to treatment will only be made possible if there more financial support is provided to those pushing it forward. Grants from the National Science Foundation for research into this area pale in comparison to the amounts being poured into big data and machine learning research.

Both play a part. But not on their own. A different strategy is needed, and so far we are yet to even attempt using mathematics – a strategy that has helped in answering many of the biggest questions we face – despite its “unreasonable effectiveness”.