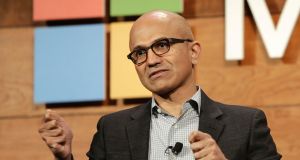 Microsoft has said it will release a translation app for Windows and other operating systems from rivals Apple Inc and Google, part of a broader race between the world’s largest technology companies for supremacy in the field of artificial intelligence.

The translator app, following a Skype translator service Microsoft unveiled in 2014, can convert nine spoken languages and 50 written ones, research executive Lili Cheng said at an event in San Francisco. The app relies on AI techniques such as speech recognition and machine translation.

The company also announced a software toolkit, available next year, for device makers who want to put its Cortana digital assistant in their products. One early partner is Harman International Industries, which is using Cortana for voice-activated speakers. Lender Capital One Financial is using it to help customers manage their money, and Expedia has developed a bot for hotel bookings through Cortana and Microsoft’s Skype video chat service.

Microsoft chief executive Satya Nadella sees AI as a crucial part of the company’s future and he’s pouring time and money into the field. Microsoft launched a new AI-focused venture fund this week. In March, it unveiled a “conversation as a platform” strategy, which uses so-called chatbots that people can speak with to control apps, find information, buy things and engage socially.

Continuing the bot theme, Microsoft introduced a QNA bot on Tuesday that lets website builders replace a site’s FAQ section with a bot that can answer questions. The company also said another chatbot called Zo it unleashed last week on the Kik chat app has 110,000 users in the US.

1 How much state pension will I get next year?
2 Up or down – how much is your Local Property Tax this year?
3 Housing crisis here to stay in absence of big rethink, industry warns
4 PTSB plays down Ulster Bank talk as it sells €1.4bn of loans
5 Am I crazy to consider switching to an Ulster Bank mortgage?
Real news has value SUBSCRIBE