How to . . . turn your young genius into the next Mark Zuckerberg? Try a tech camp

Courses are offered for different age groups, and some even incorporate outdoor work 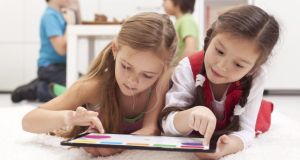 You may have already abandoned the hope that your child could one day play for the top Premiership team, thus keeping you in a manner you’d like to become accustomed to in your retirement, but there are other options.

Technology is now an integral part of children’s lives from an early age. The popularity of smartphones and tablets means children are far more familiar with touchscreens and apps than ever before, giving them a distinct advantage as they grow up into an increasingly digital world and workplace.

The talk of teenage millionaires and twentysomethings heading up billion-euro companies may well have turned your head. If you have dreams of your child growing up to be the next Mark Zuckerberg or Patrick or John Collison, it might be worth checking out some of the technology camps springing up around the country to keep your budding genius occupied during the holidays.

The camps range from those that do a basic introduction to technology and its uses to more advanced workshops that teach your child how to write their own code and potentially build their own games and apps.

There are different age groups catered for, from primary school level to school leavers, and children of all abilities will be able to take part.

If you want to start simple and concentrate on the iPad, there are plenty of options. Let’s Go is running a series of iPad camps in locations throughout the State, which will familiarise children with Apple’s tablet and a number of different types of apps, from photos and music to movies.

Bite of the Apple

It’s also designed to incorporate some outdoor work, meaning children aren’t sitting indoors all week. The programme was created by Ciarán McCormack, who was appointed creative director of the Film in Schools (FIS) project in 2003, and now develops digital media projects aimed at a pan-European audience.

The idea of encouraging a love of technology at a young age is one tech camp veteran Whizzkids has been backing for some time.

In operation since 2002, Whizzkids offers camps that last for anything from a half-day to a week. The camps cover a wide range of topics, from learning to design video games and create websites to more advanced coding skills.

Run in local universities and college campuses, the camps supply all the equipment and materials needed. And because they are located in third-level institutions, they have access to all the facilities and equipment the locations can offer. Day camps are for those aged eight to 15 years old, while more advanced residential camps that will cater for 13 to 17 year olds.

The programme will not only give students a look at computer programming, robotics and multimedia applications, but will also provide an insight into the educational environment at NUI Maynooth and the chance to take part in some of the college’s research projects.

That could be invaluable in encouraging them into a career in the science and technology field in the future – in line with what the Government feels is the future of the country.

The camp is aimed at 14-18 years old, and takes place in June and July. Students can learn how to create animations, programme robots, write their own code, build websites and create digital music.

If you have a budding entrepreneur on your hands, the Riptide Academy’s App Ace programme is worth investigating.

Aimed at children between the ages of 10 and 16, the programme encourages students to work together in what essentially amounts to a tech startup, developing a product and business plan, and encountering all the challenges that come with it.

It may sound a little grown up for your average 10 year old, but it teaches them valuable skills, such as collaboration and how to develop a concept, but mixes it with fun elements too.

The programme is run by Mount Merrion Community Centre in Dublin, with camps starting from mid-June and running until the end of August.

Although it has some indoor activities, such as app design, coding, blogging and introduction to robotics, there is also a chunk of time devoted to outdoor activities such as GPS and QR treasure hunts and the chance to launch rockets.

So what can you expect all this extra curricular learning to cost you? Prices for the different initiatives vary, but parents can expect to pay about €80 and upwards for weekly camps.

The one downside to introducing your child to the world of tech start-ups is that you may find yourself having to invest in more high tech gear for them as a result – or at the very least, finding your own tablet has suddenly been co-opted by the future tech billionaire in your home as they try to come up with their winning app idea. You have been warned.

1 Coronavirus: Construction sector most significant part of new shutdown
2 Wetherspoon’s panto-villain chairman may have the last laugh
3 British exceptionalism backfires in style as Johnson tests positive for coronavirus
4 Volkswagen burning through €2bn in cash per week
5 Mobile, broadband suppliers to be given extra radio spectrum
Real news has value SUBSCRIBE