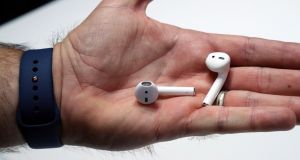 Apple’s AirPods have finally gone on sale, almost two months after they were originally slated for release.

Currently available only online, the wireless headphones will set you back €179, and might even make it in time for Christmas, according to Apple’s Irish website.

But there are reports that delivery of the headphones is already pushing into 2017, with some places experiencing a four-week delay.

AirPods were announced in September, when Apple unveiled its iPhone 7 and 7 Plus handsets. The new iPhones eliminated the headphone jack, with Apple offering customers the choice of headphones with lightning connectors – Apple’s current proprietary connection for its mobile devices – or bluetooth. The AirPods were expected to go on sale the following month, but in early November, it emerged that Apple had delayed the launch.

The carry case for the AirPods also doubles as a charger, with the headphones themselves having a battery life of around five hours’ listening time in a single charge.