How can you get as close as possible to the World Cup final? Bump up your visual technology 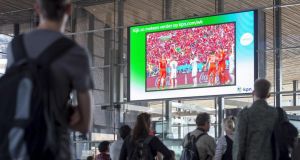 Travellers watch the World Cup on a giant screen in the main hall of the central railway station in Rotterdam, Netherlands. How big a screen can you fit into your living room? Photograph: EPA/Lex van Lieshout

The big day is fast approaching – the World Cup final takes place on Sunday and if you are a football fan, chances are you want to make the most of it. That means having the best set up possible within your budget to make sure you get as close to the Rio experience as you can.

The most important part of the entire thing is, of course, the screen.

If you are looking for a new television, you have a few choices. Plasma screens may be on the way out – Samsung said earlier this month it was stopping their manufacture – but they are still on the market at a reasonable price, and offer great picture quality. However, you might want to look at LED in terms of energy efficiency. This technology offers better picture quality than LCD, and won’t cost you as much in electricity bills.

Size is important too. Television screens, once considered large at 40 inches, can now be bought in 75-inch and more.

A 50-inch television might be a good compromise. Alternatively, you could just shift everything closer to the screen, ignoring your mother’s warning that you will end up with square eyes. If it hasn’t happened yet, chances are she may have been lying to you.

Don’t be afraid to play around with the picture settings either to get the best representation of the pitch that you can. You can bump up the saturation to make the green pop, or opt for something a bit more realistic.

Around the time of the last World Cup, it was all about 3D. This time, it’s 4K that television makers are pushing.

You’ll need both a new television and access to footage filmed in 4K. Sony has been filming some of the matches in the new standard, but it’s only a select number of games – including the final – and for Irish users, there isn’t anyone actually broadcasting in 4K. That footage will be made available by Sony on their Bravia 4K televisions at a later date.

The televisions are pretty expensive too, so for the time being it might be best to wait and see what happens with prices rather than rushing out to “future proof” your TV to the tune of a couple of thousand euro.

See that scart cable? Bin it in favour of a HDMI cable. You don’t have to spend a fortune on gold plated cables, but the scart cable just won’t cut it for HD broadcasts. Speaking of which, you’ll need the HD channels too – BBC, RTÉ,Sky and Setanta offer HD broadcasts for World Cup matches. Otherwise all the fancy cables in the world won’t make a difference.

If you are feeling flash with your cash, take a look at the new generation of curved televisions hitting the market. The idea is that you will feel more immersed in the content, and it will give you better viewing angles: a sort of 3D effect without the glasses and the nausea some of us suffer as a result.

The bad news? They’re pricey. Samsung’s current range will set you back €2,500.

The second option for large screen viewing is a projector. It can be a more budget friendly alternative, and can be easily removed if you’re short of space.

However, there are things you should take into account.

Make sure your chosen projector is suitable for what you intend to use it for – those designed for office use will do better with data, such as presentations and documents. They may not handle video quite as well. Again, the connections will be crucial, whether VGA, component, HDMI or the elusive 4K. Projectors generally offer VGA, but for good quality home video – and assuming you have the appropriate content source – HDMI is far better. Choose wisely, and weigh it up against the overall cost of the device.

You can get bogged down in contrast ratios and brightness. The most important, arguably, is brightness; and how bright you go depends on your chosen room. Using a projector in a darkened room means you can get away with a lower lumens rating – up to 1,200, perhaps – whereas rooms with more ambient light will need something a little brighter, maybe in the 2,000 lumens region.

The size of your room will also dictate what projector you buy. If it’s small, look for something with a short “throw”, which means it can project a large image from a short distance away. Some projectors require more space than others: it’s best to establish how much before you shell out the cash.

There is no point in getting a projector if you don’t have the means to display the picture correctly. While a smooth light coloured wall will do in a pinch, getting a good quality screen can make the difference. That all adds to the final price tag though.

You may also need to invest in some external speakers for audio. Although some projectors do broadcast audio, the quality can be poor.

You can go budget for under €100, or push the boat out and spend almost €1,000 on a soundbar that promises to deliver immersive sound, with your choice of manufacturer ranging from JVC and Yamaha to LG, Sony and Bose.

The next option is 5.1 surround sound system, or perhaps 7.1. That requires more space and accurate positioning in your room, but will give you a more realistic representation of sound as the action unfolds.

Position your subwoofer and speakers properly and it’s almost like you’re there. Again, you have a choice of budget to premium systems.

Surround sound systems can be expensive, so if you don’t want to shell out you could make do with what you have. Many televisions have built-in equaliser settings, which you can adjust to tune out certain frequencies or highlight others – for example, if you want to drown out the commentary, or perhaps make the crowd noise less intrusive.

With your audio and visual needs sorted, all you need is a comfy chair, a steady supply of snacks, and you’re good to go.