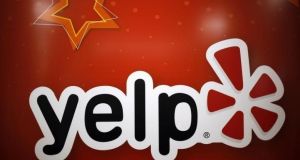 A breakdown of 2015 revenues for Yelp Ireland Limited show €26.7 million in turnover derived from North America with a further €5.8 million from activities in Europe

Online review platform Yelp has taken a €65.4 million writedown on its Irish assets following the company’s recent decision to shut most of its international operations.

The company, whose main Irish unit recorded turnover of €32.6 million last year, incurred the impairment charge after it decided to wind down its sales and marketing activities outside of North America.

Yelp came in for criticism for the manner in which it announced plans to close the operations, most of which are based in Ireland. The company, which took on 100 people in Dublin only two years ago, relayed details of the move in a conference call with institutional analysts.

It said it would cut up to 175 sales and marketing roles at its international operations, raising fears for up to 100 jobs at its European headquarters here.

Newly filed accounts for Yelp Ireland Holding Company Limited show it reported a €65.4 million loss last year due to the writedown of the cost of assets in trading subsidiaries resulting from the wind-down of activities.

“The carrying value of the company’s financial assets in some global trading subsidiaries and other items have been adjusted to reflect any impairment due to the cessation of sales and marketing activities, which the company’s subsidiaries are involved in and to bring the assets in line with what the directors believe is its recoverable value,” the directors said in a note included with the Yelp Ireland Limited accounts.

A breakdown of 2015 revenues for Yelp Ireland Limited show €26.7 million in turnover derived from North America with a further €5.8 million from activities in Europe.

According to the accounts, Yelp Ireland employed 92 people last year, of which 70 were working in sales and marketing with a further 16 in administration roles and six in engineering jobs. This marks a rise in headcount from 60 in 2014.

The amount owed by Yelp Ireland to group companies fell to €3.58 million in 2015 compared to €16.5 million in the prior year.

1 Coronavirus: Property rental in the jaws of the epidemic
2 I want to change my will quickly in case I fall ill. Do I need a lawyer?
3 WhatsApp limits message forwarding to slow spread of misinformation
4 NTMA raises €6bn from bond auction to help State meet costs of Covid-19
5 Kerry fintech Taxamo agrees partnership with Deloitte
Real news has value SUBSCRIBE