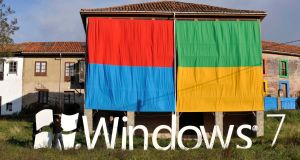 As of January 14th, Microsoft ends support for Windows 7: if you are a business still using the nine-year-old operating system, it is time to consider your options. Photograph: Eloy Alonso

Tuesday is D-Day for many business. As of January 14th, Microsoft ends support for Windows 7, and if you are a business still using the decade-old operating system, it is time to consider your options – and quickly.

As of Tuesday, Microsoft will no longer issue patches or security updates for Windows 7 systems. While your computer will continue to work, users could find themselves open to security holes that are discovered after that date. Malware may be created to exploit any vulnerabilities found, and while you can still update your antivirus software, it might be time to start looking at upgrading your system.

Why is Microsoft ending support?

All things must come to an end. Windows 7 is a nine-year-old operating system. In the meantime, we’ve had Windows 8, which was designed with tablets in mind, and Windows 10, which got a more favourable reception. It makes more sense for Microsoft to concentrate on those systems than updating software for a shrinking user base. It is, after all, a business; businesses generally like to make money.

Microsoft had a massive upgrade programme for older machines back when Windows 10 officially launched. For a year after its release, Windows 7 and 8 users could upgrade to the new system free of charge – unless you were an enterprise user – provided the system was compatible. Officially, that programme has now ended, leaving users who failed to upgrade in time paying out fees from €145 to get the new operating system.

Microsoft stopped adding new features to the operating system in 2015. Extended support - bug fixes and security updates - continued, but Microsoft has issued repeated reminders that the extended support would be soon coming to an end, so this cannot have come as a surprise to anyone.

What does this mean for businesses?

We’ve been here before. Windows XP support was ended in 2014, leaving thousands of Irish businesses scrambling to upgrade their systems. Almost six years later, here we are again.

There are thousands of Irish businesses out there still using Windows 7 that have yet to make the leap to a new operating system for various reasons. For some, it’s because migrating systems can take up to 12 months to complete. For others, it’s a software compatibility issue, and the requirement to rigorously test any software that will be used on the updated operating system.

You have three options. First, you can continue as you are now and roll the dice on malware. Some businesses may get away with this for a while, but it does mean taking a chance with security.

The second option is to upgrade. For some businesses, though, the upgrade to Windows 10 will mean investing in new machines.

If you are still using Windows 7 in your business and can’t – or won’t – upgrade, there is one final option: paying for extended support. That doesn’t come cheap though, and is aimed at enterprise users. It wouldn’t make sense for smaller companies. The HSE, for example, is spending more than €1 million on support for outdated machines. The health service has 58,000 Windows devices, and 46,000 are running Windows 7, which means there will be a major upgrade programme in the works.

Extended support won’t last forever either – even at a price. Upgrading is inevitable. Businesses have to make the decision whether to pay for extended support and delay the upgrade, or go for it now.