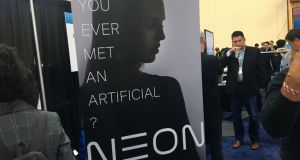 Each simulated human – which would exist only on screens, not in the real world – would be called Neon.

Samsung Electronics’ experimental research arm has brought to CES 2020 a demonstration of what it calls the world’s first artificial human, a virtual simulation of a human intelligence that learns, converses and sympathises like a regular person.

Each simulated human – which would exist only on screens, not in the real world – would be called Neon, and Samsung’s concept is that they would grow to develop believable personalities that would eventually make them friendly companions, yoga instructors, TV anchors and spokespeople.

“There are millions of species on our planet and we hope to add one more. Neons will be our friends, collaborators, and companions, continually learning, evolving, and forming memories from their interactions.”

Mistry has tweeted one example of a Neon that is dressed in the signature look of the late Apple co-founder Steve Jobs.

Using neural networks and other artificial intelligence techniques, CORE R3 has been trained up with information about how humans look, behave and interact and “can computationally create lifelike reality that is beyond normal perception to distinguish,” according to STAR Labs.

Samsung will be giving in-person demonstrations to CES 2020 attendees in Las Vegas this week. – Bloomberg