It’s getting real: Samsung to unveil its ‘artificial human’ at CES 2020 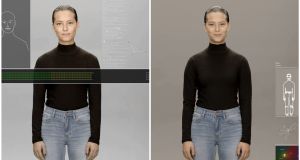 Neon: The female avatar (who is dressed very similarly to Steve Jobs) has been in development at STAR Labs for several years

Samsung is building hype for the unveiling of its Neon project at CES 2020. Neon is an “artificial human” or, if you look at Pranav Mistry’s Twitter account, it appears to be a smart assistant in the form of an avatar. Mistry, president and CEO of STAR Labs at Samsung, tweeted on December 5th: “Flying to CES tomorrow, and the code is finally working :) Ready to demo CORE R3.”

He posted an image of a human-like avatar adding that “it can now autonomously create new expressions, new movements, new dialog (even in Hindi), completely different from the original captured data”. The female avatar (who is dressed very similarly to Steve Jobs) has been in development at STAR Labs for several years, according to Mistry.

If it is capable of generating new expressions and movements, then it seems as though the kind of technology used to create deep fakes will be driving Samsung’s version of Siri or Alexa, but with a virtual body. It’s not yet clear but Neon may live on smartphones, laptops, televisions or perhaps within a smart home environment.