McDermott has world domination in his sights after near-death experience

Multimillionaire software CEO on his ‘Irish brother’ Bono, his accident and future plans 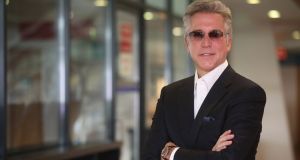 Chief executive of SAP Bill McDermott. He has redoubled his commitment to sharing the lessons of his journey from the corner shop to the corner office following his near-death experience. Photograph: Julien Behal Photography

He is one of the highest paid chief executives on the planet and a showman CEO whose close friends include legendary crooner Tony Bennett. But Bill McDermott is the first to admit that success didn’t come easily for him.

In fact, his is a classic rags-to-riches story. “I wouldn’t be here today had I not had the kind of journey I’ve had,” he says, discussing how his upbringing helped mould his career.

“The emotional intelligence you gain from having the kind of life I’ve lived is helpful, particularly in navigating choppy waters and keeping people inspired around a common goal,” the businessman adds, talking to The Irish Times on a recent visit to Dublin.

Growing up in a working class family in Amityville, Long Island, McDermott got his start early. By the age of 11 he had a paper round. Not long after he was regularly working three jobs at a time, doing everything from pumping gas to selling cookies door-to-door.

The businessman eventually ended up doing shifts at a deli on Long Island, which he then acquired from the owner for $7,000 in promissory notes at the ripe old age of 16.

“I loved work as a young man. I came from a working-class family so there wasn’t a lot of discretionary cash. Working gave me confidence, it gave me security, it gave me a belief in myself.”

He also believes it was critical in teaching how to interact with others.

“I don’t think that a lot of kids today have that confidence you get from work. They don’t understand the beauty of working.”

After buying the deli, he continued to hustle until he earned enough to put himself through college and to get a foot in the door at Xerox. He started out selling photocopiers on the streets of New York, but quickly moved up the ladder.

After 17 years at the company and having became the company’s youngest ever division president, McDermott jumped ship to head up research firm Gartner, before joining the German enterprise software giant SAP, which he now leads.

McDermott started with SAP in 2002, and was appointed co-chief executive in 2010. He became SAP’s sole head, and the company’s first non-German CEO four years later.

SAP’s shares have almost doubled in value since the start of the decade, and have risen 46 per cent since 2014 alone, giving the firm a market value of €107 billion as of early 2017.

SAP is Europe’s largest software firm, with 365,000 customers in more than 180 countries, and it employs more than 87,000 people globally, including nearly 2,000 in Ireland. Last year it recorded revenues of $22 billion.

Not surprisingly McDermott is handsomely rewarded for his work. His total pay last year jumped to €15.6 million, surpassing that of Daimler boss Dieter Zetsche, to become the highest paid company executive in Germany, where he now lives.

Following his meteoric rise, McDermott (56) could be forgiven for taking things easy, particularly following a freak accident two years ago that left him blind in one eye. But that seems unlikely.

Case in point: it is less than 24 hours before SAP is to deliver its latest quarterly results and rather than sitting at home prepping for that, McDermott has travelled to Dublin to speak to a room full of people at Croke Park about sustainability. It is one of the buzzwords that peppers his conversation, along with empathy.

If anything McDermott has redoubled his commitment to sharing the lessons of his journey from the corner shop to the corner office following his near-death experience.

“I was always in the moment before the accident but there’s a depth and a range to life when you realised you almost didn’t have one. You just feel things at a very deep human level and there is a greater appreciation for every encounter.

“I always considered myself a lucky guy but I feel that even more now. In fact, if I could move the hands of time back and rewrite the script so that it [the accident] never happened, I wouldn’t want to.”

It certainly seemed like bad luck when McDermott had his accident while staying at his brother’s home in the US in July 2015. The businessman fell face first into the glass of water he was carrying after slipping on the stairs in the middle of the night.

He suffered facial fractures, severe lacerations, and extensive damage to his eye. His injuries were so bad he nearly bled to death. Despite extensive surgery, the doctors couldn’t save his eye. Just three months after the accident McDermott was back at work.

“I don’t feel affected. I see everything. I even see things I didn’t see before,” he says.

McDermott says he is all about staying real and, while he is apt to drop in name checks to famous friends such as Tony Bennett, he says he always tried to stay humble.

“I’ve gone from having a cross above my bed in which I would stash my dollar bills because I figured it was probably safest with Jesus to being someone people talk about in terms of my salary range. But I’m still the same guy.

“What I can tell you about the job I have now and why I do it is that I was born to be a leader and I love being in service to other people. What I get inspired by every single day is having responsibility for the more than 87,000 men and women who count on me to be in the trenches and help support them.”

With a name like McDermott is is not too surprising to find there is a link to Ireland. He’s a third-generation Irish American with roots in Co Roscommon on his father’s side.

Bono, another friend of the businessman and someone McDermott describes as his “Irish brother”, has previously suggested that it’s McDermott’s Irishness that makes him unique as a leader.

“Bill McDermott sees ambition and compassion as comrades in the workplace rather than competitors. That’s rare. He claims it’s just common sense...but I claim it’s the Irish in him,” the singer said in a blurb on the back of the businessman’s autobiography Winners Dream [sic], which was published a few years ago.

This may or not be the case. But SAP’s long-standing relationship with Ireland has certainly expanded during his leadership. The company, which this year marks its 20th anniversary here, recently announced plans to hire an additional 150 employees locally to bring total headcount in Ireland to about 2,000. This comes after staff numbers have doubled over the last three years.

SAP’s staff in Ireland work across 40 lines of business – from research and development to sales and customer support. It employs staff from about 60 countries, who between them speak 47 languages.

“Ireland is extremely important for SAP. A lot of innovation is happening here, which makes it one of the most important hubs we have for the company. We’re very proud of what we’re doing here, and look forward to that relationship deepening,” he says.

“SAP will be the world leader in business software within the next five years. SAP will also be redefining what it means to inspire artificial intelligence in a way that complements human productivity. We will be the leading company on the plant in our space, and maybe also the most interesting company in the world period.”

He doesn’t get a lot of downtime, but says he can still spend quality time with those closest to him.

“Last Sunday I watched a football game with my son and we then went to a movie and out for dinner. It was the perfect day. The relationship you have with family is the most important thing. It’s not just about financial rewards.

“I don’t miss the important things, and I never did. Birthdays, ball games and so on...I’ve always been there for them all. It can be tiring but I always found it inspiring to be able to get home. You have to be a person with balance in your life or you’re a robot.”

With his contract running to 2021, McDermott has a few years before he decides whether to commit to staying with SAP. He isn’t sure yet whether he’ll still be leading the company in five years or, indeed, if they will want him. But whatever happens, retirement is not something he is contemplating.

“What I can tell you is that the one thing I will not be doing is carrying around a set of golf clubs or a tennis racquet at some country club. I will still be out there pushing.”

From: Flushing, Queens. New York, but grew up in Amityville, Long Island. He now lives in Germany

Something you might expect: Bill is big on empathy. “If you don’t have empathy in your heart for other people then you’re nobody. I always wanted to be somebody.”

Something you might not expect: “I was a shy kid. People think I was born an extrovert, as though I popped out of a box and started giving speeches, but everything evolved one step at a time.”