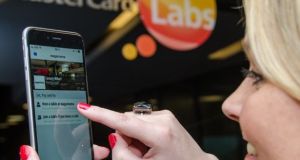 Mastercard’s Irish subsidiary is increasingly focused on developing products and services that are are built on so-called “deep tech” such as blockchain, artificial intelligence and machine learning, the company has said.

Speaking to The Irish Times, Ken Moore, who lead’s Mastercard’s R&D initiatives globally, said the company’s Dublin-based unit was moving beyond its initial focus of developing digital payments solutions to the wider group.

He said the business was now looking to go beyond the hype that surrounds new technologies such as blockchain to develop “real, grounded services and products” that would be rolled out across the wider group.

“This is not exploratory work for us,” said Mr Moore.

Mastercard, which is the second-largest payments company globally, has significantly grown its Irish business in recent years, after deciding to locate much of its research and development work in Ireland.

The payments giant now employs more than 400 people at its facility in Leopardstown, where the headquarters of its R&D arm Mastercard Labs is based.

The lab has largely focused on digital payment solutions, such as the QKR app, which is used by the likes of Wagamama, and Identity Check, a biometrics-based product used for verifying identities. However, the Irish business recently announced plans to create an additional 175 new jobs locally with new roles including blockchain specialists, data scientists and cloud infrastructure specialists.

Mastercard’s Irish business has run at a loss in recent years although as Mr Moore noted, this is largely because it hasn’t been focused on driving revenues.

“We build new products for Mastercard globally out of Dublin so we incur the costs for that in Ireland even though the services we provide are global,” he said.

Nonetheless, newly filed accounts show the unit bounced back from a €30.9 million pretax loss in 2016 to record a €14.2 million profit last year as revenue jumped from €18.6 million to €30.1 million.

The company’s finances were also boosted by a €45 million non-refundable capital contribution from its parent.

Mastercard earlier this year announced a major restructuring at its Irish R&D unit to coincide with the departure of Garry Lyons, who set-up Mastercard Labs locally in 2012.

He added that the unit was regarded highly within the wider Mastercard group. “We’re very much seen as a success story due and are increasingly growing in relevance,” said Mr Moore.