Losses mounted for Cubic ahead of €40m funding round last year

Mobile connectivity firm reports €14.9m loss for the 12 months to end of December 2016 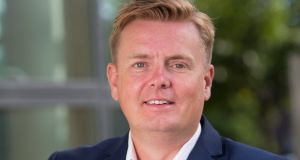 Cubic Telecom, led by Barry Napier, was established in 2006 and has raised funding support from big name backers such as chipmaker Qualcomm and car manufacturer Audi

Cubic Telecom, a Dublin-based technology firm which raised €40 million in a Series C funding round last August, saw losses rise significantly in the year prior to that investment.

Newly filed abridged accounts show the company reported a €14.9 million loss for the 12 months to the end of December 2016, up from €8.9 million a year earlier. Accumulated losses rose to €40.9 million from close to €26 million.

At year-end, Cubic had net liabilities of €3.09 million as against €10.8 million in assets in the prior year.

No details on revenue were included in the latest accounts but the firm reported turnover of €3.8 million in the previous year.

Cubic is a mobile connectivity company established in 2006. The firm, which is led by Barry Napier, has raised a total of €75 million from big-name backers such as chipmaker Qualcomm and car manufacturer Audi.

Other investors include the Ireland Strategic Investment Fund, the €8 billion fund which is managed and controlled by the National Treasury Management Agency. It joined the €40 million funding round for the company last August. That investment consisted of a €10 million loan which was received in January and February 2017, and a cash injection of €30 million.

“The investment issued was used to finance continued growth and working capital commitments and company research and development of new products,” the directors said in a note accompanying the latest accounts.

Microsoft, Qualcomm, Vodafone, AT&T, Volkswagen and Audi are among its clients. Other include the Melbourne-headquartered telecoms giant Telstra, with whom the company signed a deal worth up to €20 million late last year to bring mobile connectivity to up to 200,000 VW cars in Australia.

Cubic last year announced plans to create an additional 60 jobs to take headcount to 140 people following an international deal with Audi to bring connectivity to cars through the installation of a sim card that creates a wifi hotspot for the vehicle.

1 How safe is it to go back to the office?
2 Elderly parents living in property you own will save you on capital gains tax
3 More than 40% of help-to-buy recipients already had deposit
4 Most workers now expect choice to work from home part-time
5 Construction workers among first PTSB borrowers off payment breaks
Real news has value SUBSCRIBE