Five gadgets to help kickstart your 2018 health and fitness regime 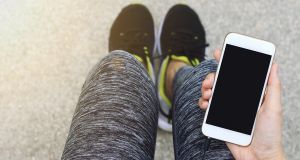 Have you overdone it during the festive period? New Year is traditionally the time for people to pledge to get in shape, join a gym, make a lot of promises - and then break them. Could wearable technology be the answer to keeping you on the straight and narrow in 2018?

Fitbit’s latest smartwatch-slash-activity-tracker is an improvement over the Blaze in terms of aesthetics. Even though it only comes in one size, the Ionic doesn’t feel too chunky on smaller wrists, or too small for larger users. It’s primary function is as a fitness device - it comes with heart rate tracking, movement and sleep monitoring, and the Fitbit Coach app - but there are extras, such as a payments app, third party app support and notifications from your smartphone. It doesn’t touch Apple in terms of available apps, but with a battery life that extends several days from a full charge, it certainly earns its place among fitness devices you should consider.

Which brings us to Apple’s smartwatch. Now up to Series 3, the device measures your heart rate, handles your calls and emails and passes on your messages. Plus it works with third party apps so you can run, walk your way to a fitter you. Like the previous version, it can also track your swims and has built in GPS, so your phone doesn’t have to carried at all times. The GPS version is available in Ireland, but in the UK, US and a handful of other countries, the Series 3 has a cellular option that allows you to use your existing phone number on the watch, so you don’t lose your connection even if your phone isn’t close by. There aren’t any networks offering that feature here though - for now.

Created by Northern Ireland based Neurovalens, Modius is a band that is designed to help you lose weight. It uses vestibular stimulation to stimulate part of your brain that controls fat storage and metabolism, helping boost the latter while decreasing your appetite. The best thing is that because it can affect your balance while you’re using it, you are actively encouraged to sit down and relax while you use it.

I’ve grown to dislike running. While some people find it therapeutic to strap on some trainers and head off into Ireland’s frankly disgraceful weather at this time of year, I need gentle encouragement to get out the door. So something like Vi, an AI trainer, seems like a good idea. Vi is designed to be your personal running coach, built into a set of headphones that sense your heart rate and activity. It uses the data you build up to learn more about you and your routine, and push you to do better. There are a number of training plans, including 5km, 10km and half marathons, walk to run and weight loss programmes.

The idea of training for a marathon on your sofa is a seductive one, and it’s something that BionicGym creator Dr Louis Crowe did with the device. Imagine, instead of heading out into the cold and rain, you could exercise at your desk, or while binge-watching Netflix. The device uses electrical stimulation to tap into your body’s shivering mechanism, causing your heart rate to increase and respiration rate to rise. The device itself consists of wraps for your thigh, a control unit and an app that links in with your smartphone to control the intensity of the workouts. BionicGym raised more than $2.4 million on Indiegogo last year, and is set to start shipping in the coming weeks.