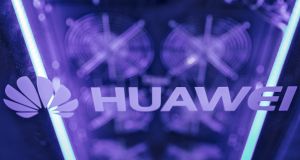 Huawei Technologies warned of its slowest revenue growth since 2013, despite making headway against Apple in global smartphones.

Revenue at China’s biggest telecommunications gear maker probably rose 15 per cent to 600 billion yuan (€76.9 billion) in 2017, rotating chief executive Ken Hu said in a letter to staff posted on the company’s verified WeChat account. That’s down from 2016 when sales jumped 32 per cent.

The company shipped 153 million smartphones in the year, using high-end but affordable devices to push aside local rivals such as Oppo and Xiaomi. Together with local peers, it has played a critical role in squeezing Apple and Samsung out from the country’s top sellers, though Apple is now counting on the iPhone X to help it win back status-conscious Chinese. But telecoms spending - its biggest source of revenue - is stagnant as construction of next-generation networks hasn’t taken off.

“Our carrier business was affected by market investment trends but remains stable,” Mr Hu, one of several Huawei executives who take up the chief executive post on a rotating basis, wrote in his memo. “The market’s fluctuations makes us more determined to team with carriers to explore and grasp” future opportunities.

Huawei’s consumer group, which sells devices including smartphones and smartwatches, is expected to see revenue grow 30 per cent to 236 billion yuan in 2017, according to a separate memo from Richard Yu, head of the business.

Founded in 1987 by former army engineer Ren Zhengfei, Huawei has grown into one of China’s largest and most diverse private corporations.

Huawei has now stepped up an expansion into overseas markets such as Europe and is said to be in talks with US carriers about selling its phones on Apple’s home turf. Ranked third globally, the Chinese company took 10.4 per cent of global shipments in the third quarter versus its US rival’s 12.4 per cent, according to research firm IDC.

Huawei’s chief executive didn’t discuss profitability or give division specifics in his memo, which precedes a more comprehensive results report. But it is said it wanted to keep a closer eye on the bottom line. The company barely grew earnings in 2016 and has said it must reduce operational expenses. In last year’s letter, then-chief executive Eric Xu pledged to re-tool management’s approach and avoid “blind optimism and rhetoric”. Counterpoint Research estimates Huawei grabbed 4.9 per cent of global handset profits in the third quarter, ahead of its Chinese rivals but still lagging Apple and Samsung.

The end-of-year messages come just days after the company said the head of sales for its China consumer business has been detained in a corruption probe.

“We were disappointed to see that there are still employees and managers who were turned over to judicial authorities this past year,” Mr Yu said. “I would like to stress, once again, that the company has zero tolerance for corruption. Do not take chances.”

1 Hurrah for the companies giving staff more time off
2 RTÉ to seek 70 voluntary redundancies as ‘large costs’ beckon in 2021
3 Some Irish money market funds came close to danger in March
4 Covid-19 will worsen shortage of accountants, says CPA Ireland
5 ‘We lost money on our planned wedding in Spain. Covid saw to that’
Real news has value SUBSCRIBE