Christmas tech: What to do with your old gear

Find yourself with a smartphone too many? 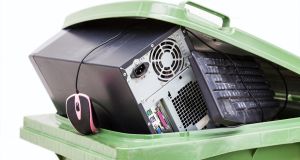 Did Santa bring some nice shiny tech toys this Christmas? Perhaps you’ve got a few old things lying around the house, surplus to requirements? Don’t just leave them sitting in a drawer gathering dust, or throw them into the nearest bin. Here are a few suggestions that may give your old devices a new lease of life - or afterlife.

There are plenty of charities that can repurpose your old technology and give it a new lease of life. For example, Irish Autism Action will take old phones that can be recycled and help provide iPads for children with autism. For more information, see this site.

Camara Education will take old computer equipment, including PCs, printers, monitors, keyboards and mice, along with the various cables. The company will also take tablets, smartphones and chargers.

There are plenty of utterly mad suggestions about what you can do with an old smartphone - iPhone wallet anyone? - but you don’t have to take it that far. Your old smartphone can become (depending on the model) a smart home hub, a universal remote or home security device. For example, Smartfrog allows you to turn your old iPad or iPhone into a security camera with its app. If your phone has an IR blaster - and some still do - you can use the phone as a universal remote for all your compatible devices in the home. And if you’ve jumped on board the smart home bandwagon, it’s handy to have a permanent device in the home so you don’t leave for the evening and realise your babysitter can’t turn the lights on.

If your device is relatively new, say a year or two old, you can make a bit of money back on it. Ebay, Adverts.ie and DoneDeal are all teeming with listings for mobile phones - both working and non-functional - though at this time of year you’ll be competing with a LOT of unwanted tech and Christmas gifts. You can also bring it to places such as CEX or sell to Envirofone, taking cash or credit for the devices.

Some companies allow you to trade in your mobile phone and earn some credit towards the cost of a new device. Apple, for example, runs a programme that allows customers to send back certain devices and get a gift card in return. For more information, see this website.

Electronic waste is a growing problem. According to the Global E-Waste Monitor 2017, the world generated 44.7 million metric tonnes of e-waste by 2016, and only 20 per cent of that was recycled. As people break or upgrade devices in a relatively short time period, the amount of electronic waste we are creating is reaching alarming proportions. So if your device is of no use to anyone, it’s a good idea to send it for recycling, and at least some of the components will either be reused or disposed of responsibly.

Again, Apple will recycle its devices, even if they aren’t worth refurbishing and reselling. You can also send your devices to WEEE recycling points around the country.