Apple cuts cost of iPhone battery as it apologises over performance 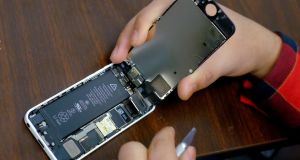 A battery is exposed as a man tries to repair an iPhone. Photograph: Eduardo Munoz/File Photo/Reuters

Apple has apologised to iPhone owners following its admission that it slows down some older handsets to protect the ageing battery.

The company also cut the cost of replacement batteries for out-of-warranty iPhone 6s and later editions from $79 (€66) to $29 (€24) — starting in late January and available worldwide until December 2018.

Last week, the technology giant confirmed it introduced a feature to its iOS operating system last year which manages performance on the iPhone 6, 6s and SE to help preserve battery life, which it says diminishes over time.

Many customers and social media users have long speculated that the firm limits older devices to encourage users to upgrade, but the company said the feature was used to prolong the life of its products.

“We have never — and would never — do anything to intentionally shorten the life of any Apple product, or degrade the user experience to drive customer upgrades,” the company said in a statement on its website.

“We’ve been hearing feedback from our customers about the way we handle performance for iPhones with older batteries and how we have communicated that process.

“We know that some of you feel Apple has let you down. We apologise. There’s been a lot of misunderstanding about this issue, so we would like to clarify and let you know about some changes we’re making.”

Apple explained how lithium-ion batteries used in the iPhone age over time.

“All rechargeable batteries are consumable components that become less effective as they chemically age and their ability to hold a charge diminishes.

“Device use also affects the performance of a battery over its lifespan. For example, leaving or charging a battery in a hot environment can cause a battery to age faster. These are characteristics of battery chemistry, common to lithium-ion batteries across the industry,” it said.

Apple also said it will issue an update to its operating system early next year to give users a better understanding of the health of their battery, so they can see if its condition is affecting performance.

1 Irish company paid €1.2m a year by collapsed Blumenthal-linked Australian restaurant
2 Hugo MacNeill steps back from Goldman Sachs role
3 Should AIB compensate me for upsetting letter on arrears?
4 Artomatix buyer revealed as Unity Technologies
5 Why bosses should not be afraid of speaking out on Instagram
Real news has value SUBSCRIBE