Limerick-based tech firm raises $10m in Series B funding round

Bill Maris, founder of GV – formerly Google Ventures – among those to invest in Teckro 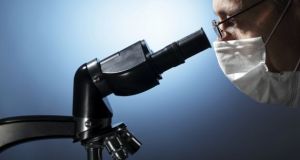 Limerick-based life sciences tech company Teckro has raised $10 million (€8.3 million) in a Series B round with investors including the founder and former chief executive of GV, formerly Google Ventures.

The latest fundraising round brings total investment in the company to date to $17.8 million (€14.9 million). It comes just 12 months after the company raised $6 million (€5 million) in a round led by Founders Fund, whose previous investments include SpaceX, Palantir, Facebook and AirBnB.

Teckro uses information retrieval and machine-learning technologies to improve the speed and accuracy of clinical trial conduct, helping turn research and development into successful drugs and treatment for complex diseases.

The company, which is currently recruiting for at least 20 software roles in Ireland, said it would invest the funds in its digital platform, which is deployed across multiple phases of clinical trials, including critical Phase III studies.

Teckro was co-founded by Gary Hughes, Jacek Skrzypiec and Nigel Hughes in 2015. They previously co-founded Firecrest Clinical, which was acquired by Dublin-headquartered clinical trials group Icon in 2011 for an undisclosed sum. It is chaired by Peter Gray, chairman of UDG Healthcare, a board member of Jazz Pharmaceuticals, and the former chief executive of Icon.

“Teckro’s plans are ambitious and they come with a real passion for improving clinical research,” said Gary Hughes, the company’s chief executive.

“This investment reflects that ambition as we expand operations and customer footprint globally, continue to invest in our product platform, and drive success for our customers at the top 10 pharmaceutical and biotech companies,” he added.