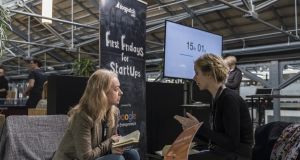 Participants in last year’s First Friday for Startups, which returns to Dogpatch Labs on Friday

Ireland is an ideal environment in which to build a globally-focused technology firm but more needs to be done to encourage experienced professionals to relocate here.

Speaking ahead of his appearance at First Friday for Startups, which returns to Dogpatch Labs this week, Mr Norton, who moved to Ireland from the United States to set up his company in 2013, said he couldn’t think of a better place to be based for budding entrepreneurs.

“I came over to Dublin with a big idea that seemed pretty crazy to many people but which was received very warmly here. People in Ireland are very open to new ideas and are ready to listen and get on board early,” said Mr Norton, now an adviser to several fintech firms.

“We hired our first employees and they were all willing to jump out of their safe jobs at big banks without us even having raised any money. That kind of ‘can do, let’s give it a shot’ attitude is pretty rare across Europe but Ireland has it in bucket loads,” he added.

Mr Norton said the local workforce had grown up in an environment in which customer service is important, there are modern approaches to running a business, and diversity is embraced.

He added that while having a small domestic market presents something of a challenge to start-ups, it also encourages them to think globally early on.

However, Mr Norton said there was a need to encourage more seasoned tech professionals to base themselves in Ireland.

“If there was a place for focus it should be on finding ways to incentivise top-end management to come here and stay,” he said.

First Friday for Startups, which is an initiative run in collaboration with Google, returns to Dogpatch Labs this Friday. Over 500 attendees took part in the first programme, which ran last year.

The programme sees members of the tech start-up ecosystem coming together on a regular basis to learn, connect and grow. In addition to one-on-one mentoring from experts, there are also keynote speakers and plenty of networking opportunities.

Attendees to First Friday for Startups, particularly those coming from outside of the capital, are invited to hot-desk for free at Dogpatch while in Dublin.

“Participants have been coming to the event from across the land, with start-ups from Cork, Galway, Skibbereen, and even Belfast. By acting as a platform, we’ve seen participation from the NDRC, Enterprise Ireland, Startup Weekend and more. First Fridays also provides easier access to other programmes such as Google’s Adopt A Startup and Silicon Valley’s Blackbox Connect,” said Dogpatch chief executive Patrick Walsh.

1 British exceptionalism backfires in style as Johnson tests positive for coronavirus
2 Wetherspoon’s panto-villain chairman may have the last laugh
3 UK needs to be honest about its Covid-19 strategy
4 Will Covid-19 force Primark to rethink decision not to sell online?
5 Retail landlords worried rents will dry up during Covid-19 crisis
Real news has value SUBSCRIBE