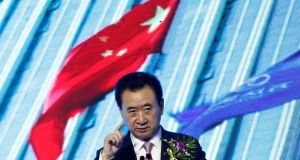 Dalian Wanda has dismissed “vicious rumours” that its billionaire chairman Wang Jianlin was detained by authorities and forbidden to leave China, though not before the suggestion sent shares in its Hong Kong-listed unit down more than 10 per cent.

The company is the latest to be hit by rumours of a disappearing or detained chairman, straining the nerves of investors in groups targeted by Chinese regulators.

A US-based Chinese-language blog said on Sunday that Mr Wang was barred from departing in a private jet at an airport in the city of Tianjian and that he was no longer allowed to leave China. Those claims subsequently were also reported by other Chinese-language media including Taiwan’s Apple Daily.

Dalian Wanda said on Monday that the reports were malicious and false. “Certain individuals with ulterior motives have recently created and spread various vicious rumours regarding the chairman of Wanda Group, Mr Wang Jianlin, ” the company said in a statement.

The event is the latest instance in recent months where media have reported that a chairman at a top Chinese conglomerate already known to be under the scrutiny of regulators has been detained or questioned by investigators, or blocked from leaving the country.

Wanda, along with Fosun International, HNA Group and Anbang Insurance, has attracted the attention of China’s regulators after an aggressive deal spree overseas. The property developer has been at the centre of the clampdown, with regulators telling banks in June to withhold acquisition finance from the group that controls a network of real estate and entertainment assets.

For Anbang Insurance, word of its chairman Wu Xiaohui being blocked from leaving China proved to be true. The businessman, best known for buying the historic Waldorf Astoria in New York, was later removed from his position.

“Investors are already a bit jittery on how these companies have been borrowing for overseas acquisitions,” said Louis Tse Ming-kwong, director at VC Brokerage, a Hong Kong-based group. “So everyone is watching these now . . . There have already been some precedents set this year and some wake-up calls for investors.”

Shares in Hong Kong-listed HNA Holdings fell more than 3 per cent on Monday morning, while the Hang Seng Index was up 0.5 per cent.

In early July, Fosun was forced to defend itself amid talk that the group had lost contact with its chairman, Guo Guangchang. Fosun promptly denied the story and later in the day, Mr Guo appeared in a live-streamed video from an office with the Shanghai skyline visible in the background. The company’s shares took a hit nevertheless.

Wanda’s empire-building has been visibly reined in this year. Last week, Wanda said it had dropped a plan to buy London’s Nine Elms Square. It has also taken drastic measures to scale back its businesses and reduce leverage domestically and overseas.

In August it announced plans to reshuffle more than $1bn in assets to free its listed unit of expensive overseas real estate projects.

1 Irish company MyBio to sell 10-minute Covid-19 antibody test
2 Angela Merkel sweeps in to save the euro zone
3 In six months we will be in the grip of a 1980s-style recession
4 What’s the real picture behind the May exchequer returns?
5 What will it take to reopen the world to travel?
Real news has value SUBSCRIBE