Limerick-based Arralis no longer working under the radar 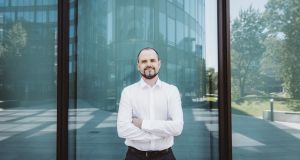 Arralis co-founder and chief executive Barry Lunn: “The most frustrating thing for us at the moment is we can’t produce enough product for the market”

The man from the UK ministry of defence had one simple question: “Who the f**k is Arralis?”

It seemed a fair question to ask given the ministry had just awarded a major contract to the Limerick-headquartered radar specialist ahead of some of the world’s biggest aviation firms and defence contractors.

The contract, to design a scalable multi-frequency global navigation satellite system (GNSS) antenna, was announced in March 2015. However, prior to the deal being signed, the ministry had dispatched one of its men to Belfast – where Arralis has a design centre – to find out more about the company.

“They were obviously a little bit nervous about handing over the contract to us given that we weren’t very well known, so had sent one of their people over to investigate the company. He basically had that one question for us,” says co-founder and chief executive Barry Lunn.

Given that Arralis went on to secure a follow-on second contract with the ministry a couple of months after it won the initial deal it would seem it managed to erase any concerns it might have had.

However, there have been plenty of other people who have asked a similar question of the company. Not least earlier this year when Arralis announced it had secured a €50 million investment from a Hong Kong-based consortium.

With the company having built up a client list in recent years that includes the European Space Agency (ESA), and the Chinese firms Beijing Bluesky Aviation Technology and Sino TekCo, it would seem the company will soon no longer be operating under the radar.

Arralis, which was established by Limerick man Barry Lunn and chief technical officer Mike Gleaves in 2013, develops products that are considered the future of global radar and wireless communications.

The company is busy talking to most of the major car makers about radar systems for autonomous cars and has been making deals with big names in the aerospace sector.

As if all that weren’t enough, Arralis is also focused on developing data transfer solutions for the Ka band of frequencies (26-40Ghz), which are commonly used in telecommunications satellites. This opens it up to projects from companies like Facebook and SpaceX as well as organisations such as ESA.

If it all sounds incredibly technical, well it is. But Lunn sums up the company’s work succinctly.

“What we do in a nutshell is bring technology that has been used in aerodefence for the last 20 to 30 years and make it on a commercial scale,” he says.

“Supercomputers used to be the size of buildings but now fit in your pockets. We’re essentially doing the same with millimetre-wave technology, shrinking it all down to size. For example, we have a 94 Ghz radar front-end radar that fits comfortably in your hand whereas the US Air Force has a detection radar that they transport in a horse box,” Lunn adds.

The possibilities for the tech seem endless, with potential applications including drone guidance systems, airport radar and driverless cars. For now, the company is focused on the continued development of its technology while also seeking to expand the range of applications for it.

“Our technology has multiple applications because we’re focused on the enabling stuff. Our customers right now are mainly aerodefence-focused, with the technology being used in things like helicopter landing systems. But as we scale up the tech and the pricepoint goes down, then new markets are emerging naturally,” says Lunn.

All this makes it an exciting if exhausting time to be leading Arralis as it moves away from being a plucky start-up to be a fully-fledged company.

“The most frustrating thing for us at the moment is we can’t produce enough product for the market. Our turnover would be double if we could ship more,” says Lunn, speaking to The Irish Times on a rare visit back to Ireland.

“The new investment we’ve gained is to be used to scale up production so our focus is on building out our first factory, which opens towards the end of this month in China. We’ve also just opened design centres in Hong Kong and Manchester and should have a factory open in the US by year-end,” he adds.

Not surprisingly, the entrepreneur, who resides in Austria, lives mostly out of a suitcase.

“Mike and I have separately been in a different country every week since early January. In the last month alone I’ve been in 11 countries and the main reason why I’m living in Vienna is because it has so many direct flights to different parts of the world, “he says.

“Things are particularly intense for us at the moment because we are busy trying to build our own independent supply chain as we wanted to avoid dealing with export licenses and tariffs, and because in our line of work you need surety of supply. We want to have supply chains across Europe, Asia and Europe so that buyers can get product easily and without delay,” Lunn adds.

Most companies experience growing pains as they scale and Lunn is aware of the dangers. But he exudes a quiet confidence as he outlines how the firm is coping.

“Scaling up is difficult. We’ve gone from 12 people last year to 35 currently and will probably be at 100 before the end of 2016. Trying to get staff, onboarding them, knowing what everyone is doing, that is all difficult stuff to deal with so we’re trying to get in some middle management to take the pressure off Mike and I,” he says.

He admits that he and and his business partner make an odd couple.

“It is a bizarre combination what with me having gone to art college and him being a former RAF engineer from Cornwall who ended up working in radar,” Lunn says, adding that the combination works well nonetheless.

“The way I see it is that we’ve graduated from start-up mode and are now a proper company and one that likes to do things properly. No matter what size we get, we’re both agreed that we will not over-promise. We could be signing contracts left, right and centre with people on stuff that we might eventually do but that’s not how we want to go about things,” he adds.

As if to prove the point the businessman recounts how the company likes to surprise its clients.

“When we got our first ESA contract they turned around and told us the timelines we were suggesting were unworkable, but we delivered early and on budget. That obviously helped us to win more deals with them,” says Lunn.

The latest deal with the agency, which was announced in late June, is for the company’s new Leonis Ka band chipset, which enables massive data rate communications speeds for commercial and science missions. This first phase Ka band Transceiver chipset contract is worth an initial €650,000.

Arralis, which was voted “Innovation of the Year” at the 2016 Irish Times Innovation awards, along with being named the IT and Telecommunications category winner, is keen to retain its links with Limerick. Lunn, who hails from the village of Caherconlish, admits that the city might not be the most obvious place to base its headquarters but adds that Analog Devices haven’t done too badly out of it.

Looking ahead, he says that pretty much everyone in the autonomous vehicle space has picked up the phone to Arralis. He also expects the company to do well from 5G, which he insists will be the last G.

Lunn, who has made no secrets of the company’s intention to eventually float, says an IPO is on the cards “sooner than you might expect.”

“The guys who have invested in us know all about scaling. They’ve IPO’d a number of companies and I expect us to be another one of them,” he says.