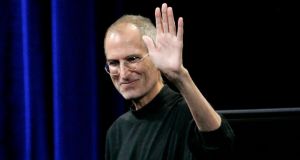 “Apple Park is Steve Jobs’s last, posthumous, hurrah; as a vanity project it is roughly on a par with Nicolae Ceausescu’s People’s Palace in Bucharest.” Photograph: Robert Galbraith/Reuters 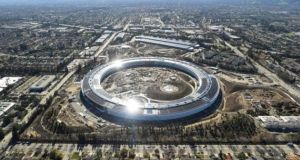 A giant spaceship has landed in Cupertino. This summer, 12,000 Apple employees will start to move into this great disc of a building, which has been eight years coming and is said to have cost $5 billion (€4.4 billion) – making it the world’s most expensive office.

Apple Park is Steve Jobs’s last, posthumous, hurrah; as a vanity project it is roughly on a par with Nicolae Ceausescu’s People’s Palace in Bucharest.

Jobs managed the spec as the control freak he was, insisting on irreproachable door furniture and stone from a Kansas quarry that was distressed to make it look like the walls of a Yosemite hotel he was fond of. The obsessiveness and the grandiosity make the marble that Jacques Attali once ordered when he was head of the European Bank for Reconstruction and Development look slipshod.

If I were an Apple shareholder, I would not be happy. Overdoing it on the decor of the HQ is a sure sign that calamity is on its way. It did not end well for Ceausescu’s Romania, nor for Attali’s EBRD.

If I lived in Cupertino I would not be happy either. There are at least 9,000 car parking spaces at Apple Park, which means too much driving. It is better for cities to have offices in the centre, so people do not have to travel so far, and can nip out at lunchtime to spend money in local shops.

Yet as an observer of offices, I am dancing a jig. Over the past two decades, three bad things have been happening with office design, and Apple Park puts all of them right.

First we have lost confidence in offices altogether as nomadic workers huddle in cafes and in their own bedrooms. Jobs’s edifice is a hymn to the importance of offices in general.

Critics are grumbling about the white elephant the building would become should Apple go bust but that misses the point. Apple Park screams: “We are here to stay and, given that, we’ve built somewhere beautiful for our staff to work in every day.”

The second bad thing is the confusion between home and work. Fashionable office designers delight in making work spaces look like the hideous apartments of imaginary hipsters – Airbnb’s office in San Francisco is filled with spaces that look like funky sitting rooms, kitchens and even a “nerd cave”.

As far as I can tell from looking at it on You Tube and reading the first review in Wired, the Apple HQ is built on the idea that work and home are distinct. There is not even any childcare on site, which is also progress. I have never wanted my employer to look after my children. I wanted to hire my own childminders and leave work in time to relieve them.

Most radical of all, Apple Park is made for grown-ups. For the past two decades office spaces have been built as if for primary school children. Google has been a world leader in infantilising its workforce with AstroTurf croquet lawns and slides. In its Tel Aviv office, staff have meetings in ridiculous flying pods – baskets with propellers on top.

This pernicious trend – ugly, stupid and ageist – started in Silicon Valley and has spread. Even at the frumpy Confederation of British Industry’s new office in London, it is all primary colours, pods and fun murals.

Apple Park has turned its back on fun and is going for beauty instead. Beauty is serious and grown-up; work should be too.

The building has two other big things going for it: democracy and greenery. Offices have been pretending to be egalitarian for decades, but as long as they are housed in skyscrapers, the chief executive is always at the top. The spaceship has only four floors and everyone in the ring will get the same view of the best thing for any worker to gaze upon – trees. About 9,000 of them are to be planted – almost one tree per person.

The only bit of hokum is Apple’s attempt to justify the expenditure. It claims that, in immaculate surroundings, people are more likely to do immaculate work. This is nonsense. Many of the world’s finest inventions seem to have been built in garden sheds.

In any case, Apple does not need any such justification. It has money to burn and has chosen to burn it on something splendid for its workers. As a shareholder I may not like it. But if I were one of the 12,000, I would be counting the days until I moved in. – (Copyright The Financial Times Limited 2017)