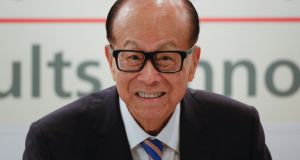 Li Ka-shing, Hong Kong’s richest man, has announced his retirement, formally passing the reins of his $100bn retail, infrastructure and property empire to his elder son Victor Li after a decades-long apprenticeship.

The 89-year-old tycoon built his Cheung Kong group from humble beginnings making plastic flowers in the 1950s to a global conglomerate that owns 52 ports around the world, numerous energy and utility companies, the 3 mobile phone network and retail chains including Superdrug and Watsons.

Known in Hong Kong as “Superman” for his dealmaking prowess, Mr Li on Friday said he would retire as chairman of CK Hutchison, his main holding company, and CK Asset, his property group. He named 53-year-old Victor Li as his replacement.

A test of a succession plan that has been decades in the making, Mr Li’s resignation is also a symbolic turning point for Hong Kong, where the economy has long been dominated by a coterie of tycoons.

“No one can replace Li Ka-shing,” said Joseph Fan, a professor of finance at the Chinese University of Hong Kong. “It remains to be observed how his retirement will affect the productivity and value of the Li empire.”

Business associates paid tribute to Mr Li, who has a personal fortune of $34bn, according to Bloomberg, making him Hong Kong’s richest man but placing him well behind Chinese internet tycoons Jack Ma of Alibaba and Pony Ma of Tencent, who are worth $50 billion and $47 billion respectively.

“He is one of the most charming and direct tycoons, with a very clear investment view and approach to risk-taking,” said Timothy Dattels, managing partner in Asia for private equity group TPG Capital, who worked with Mr Li as an investment banker at Goldman Sachs. “There’s no one in Asia at that level in terms of dealmaking.”

Regarded as equal parts amiable and ruthless by his business peers, Mr Li built his empire from nothing, with the help of a marriage to a well-off cousin, after quitting school and moving to Hong Kong at the age of 12 to flee the second world war in his home city of Chaozhou in southern China.

Wealthy enough from his plastics business to retire by the age of 30, his business continued to expand, making GI Joe and other toys for Hasbro. In the 1960s, he began parlaying the profits into property, sensing an opportunity to buy cheaply when Hong Kong was convulsed by Communist-inspired riots in 1967.

His next big break came in 1979, when HSBC agreed to sell him its stake in Hutchison Whampoa, the venerable British trading house, and finance the deal.

Through the 1980s and 1990s, Mr Li began to diversify overseas, using the cash from his stable property and infrastructure businesses in Hong Kong to buy energy, telecoms and other assets in the UK, Europe and North America.

This global diversification, and his reliance on a tight-knit group of professional executives, including Canning Fok, Frank Sixt and Susan Chow, set him apart from other Hong Kong tycoons, who tended to stick to what they knew and trust few outsiders.

Over the past two decades he also moved aggressively into technology through Horizons Venture, his private investment arm, which bought stakes in Facebook, Skype and Spotify under the leadership of Mr Li’s long-time companion Solina Chau.

Mr Li’s younger son Richard went into business on his own, with his father’s backing, and today runs PCCW, a telecoms and media group.

Victor Li, who studied engineering at Stanford, has long been groomed to take over and analysts say that, like all second generation tycoons, he will struggle to emerge from his father’s shadow.

“I don’t know whether the entrepreneurial drive is in Victor, although Richard appears to have it,” said Roger King, who runs the Asian family business centre at the Hong Kong University of Science and Technology. “That’s the usual habit for subsequent-born children of tycoons. The first born tend to be risk averse and listen to the older generation.”

Prof Fan said that part of the reason Mr Li has rebalanced his investments from China and Hong Kong into more developed markets - a move that was criticised by Chinese state media as unpatriotic - is to lay the groundwork for Victor Li to take over.

“Victor has always done much better in developed markets, where relationships are less important and property rights are better protected,” he said.

As for Mr Li, despite his nominal retirement, he is unlikely to spend his time just swimming or playing golf.

He said at a press conference on Friday that he wants to focus on his charitable foundation, to which he has pledged one-third of his assets, and key Cheung Kong decisions are likely still to come across his desk in his new guise as a senior adviser.

Bankers will miss Mr Li’s straight talk - and his fees - with his main parent company acquiring more than 300 companies worth $185bn over the past 25 years, according to Dealogic, a data company.

But Mr Li himself has proved adept at managing shifts big and small.

“I have always understood that the world changes a lot,” he told Bloomberg in a rare interview in 2016. “Just because you’re doing well now, doesn’t mean you should be set in your way.”